'He Cut Short His Leave And Lead His Men From The Front': Lt General KJS Dhillon Recites The Brave Tale Of Brigadier Hardeep Singh On Pulwama Terror Attack

The Indian Army, CRPF and J&K Police held a joint press briefing on Tuesday, laying bare on the two terror attacks in the Pulwama district over the past week

The Indian Army, CRPF and J&K Police held a joint press briefing on Tuesday, laying bare on the two terror attacks in the Pulwama district over the past week resulting in 45 security personnel attaining martyrdom.

Lt. General KJS Dhillon addressed the media and spoke on a varied number of topics, including the role of ISI and Pakistan's Army in the twin attack, whose responsibility was taken by Pakistan-backed Jaish-e-Mohhamad.

Much of the briefing was about how Pakistan was involved in the attacks and how the security forces broke apart the JeM in the space of 100 hours. But in the middle of the press conference, the Lt. General took a moment to praise his forces, especially Brigadier Hardeep Singh, who joined the operation despite being on leave due to an injury.

"One more thing I would like to tell you, Brigadier Hardeep Singh - who was also injured - he was on leave at home. When he realised that in the midnight that the operations has started, he cut short his leave voluntarily and rejoined and he came back to Kashmir and then straight to the operation site and he was leading his men from the front," Lt General KJS Dhillon said. 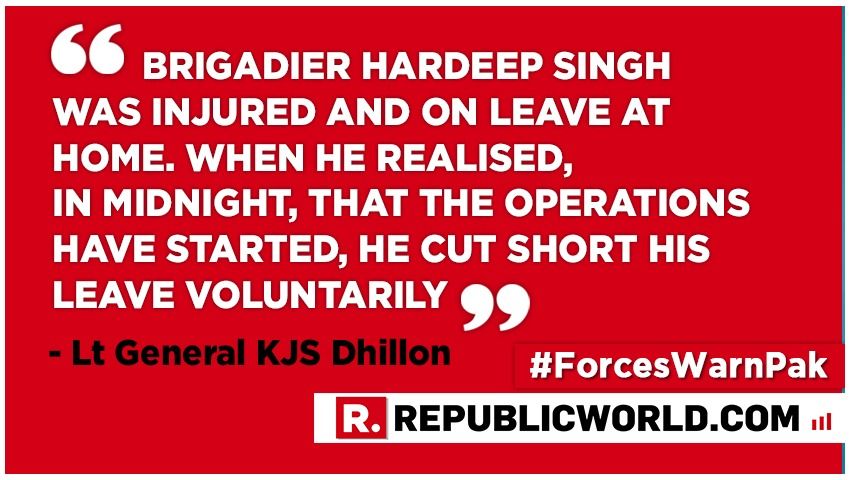 On February 14, a 70-vehicle convoy carrying CRPF jawans from Jammu to Srinagar was struck with an IED blast. In what was one of the worst terror attacks in recent times, 40 CRPF jawans lost their lives, and the responsibility for the attack was claimed by terror group Jaish-e-Mohammad.

After the diplomatic action, the security forces exacted revenge by killing three JeM terrorists - all of them part of the earlier Pulwama attack - in the very same Pulwama district on Monday. Though, in a gunfire exchange which lasted for as much as 17 hours, five security personnel were martyred and one civilian lost his life.