Republic TV on Friday accessed an official letter issued by the embassy of the People's Republic of China in India to India's Ministry of External affairs requesting temporary access for Counsellor of Embassy of China, Mr. Zhou Yuyun into the Indira Gandhi International Airport to see off Congress President Rahul Gandhi.

In the letter, the Embassy of China also stated that the gesture would 'renew' to the Ministry of External Affairs of India the assurances of its highest consideration.

"The Embassy of the People's Republic of China in India presents compliments to the Ministry of External Affairs of the Government of the Republic of India and has the honor to inform the latter that Mr. ZHOU Yuyun, Counsellor of Embassy of China, wishes to apply for a temporary pass for entry into the IGA International airport to see off Shri Rahul Gandhi, President of Indian National Congress, departure by Flight Indigo 6E31, at 11:45 am on August 31st. 2018.

It would be highly appreciated if the esteemed Ministry could kindly notify the related departments and grant temporary passes for the entry into the IGA international airport to Mr. ZHOU Yuyun, Counsellor of China Embassy.

The Embassy of the People's Republic of China in India avails itself of this opportunity to renew to the Ministry of External Affairs of India the assurances of its highest consideration." 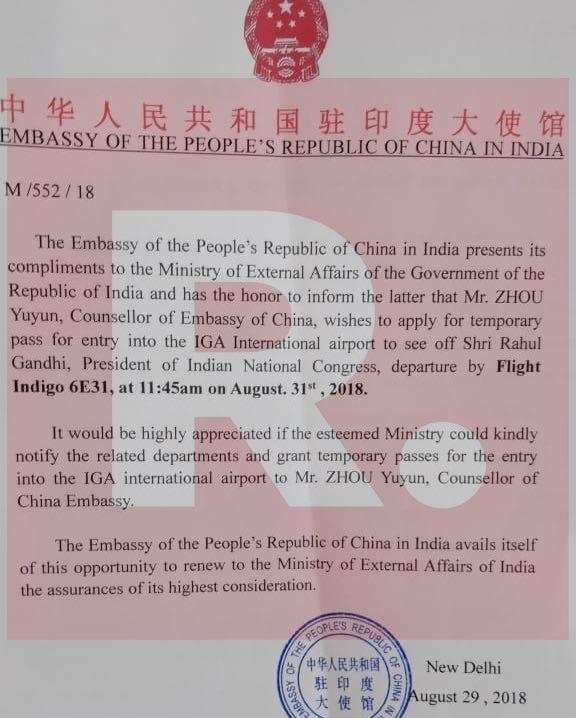 The BJP had earlier leveled a sensational charge against Rahul Gandhi on Friday and posed a number of questions to him, as party spokesperson Dr. Sambit Patra claimed that the Congress president had sought a ceremonial send-off from the Chinese ambassador to India while he was departing for China via Nepal.

In response to this application, the government of India didn't respond, the BJP spokesperson revealed, addressing the Congress president directly and saying the following: "You are Rahul Gandhi, not Chinese Gandhi. Why should the Chinese ambassador come see you off? There is no such protocol".

"Why such a demand from the Chinese envoy?", Dr Patra asked, seeking an answer from the Congress party.

He went on to elaborate on the matter: "Three permanent passes are with every envoy. Did they use it? Why did the Chinese ambassador want to see off a non-Chinese resident? Why see off an Indian resident?"

Get today’s India news and stay updated with latest news headlines. Follow the latest India news and never miss out on any updates from the world of Politics, Economy, Elections etc. Download the app or visit Republic World to watch Live TV & get all the breaking news from India.