Mehli-Shoghi bypass road in Shimla has been closed for vehicular traffic on Monday in Himachal Pradesh. This was required owing to a landslide caused by rain. 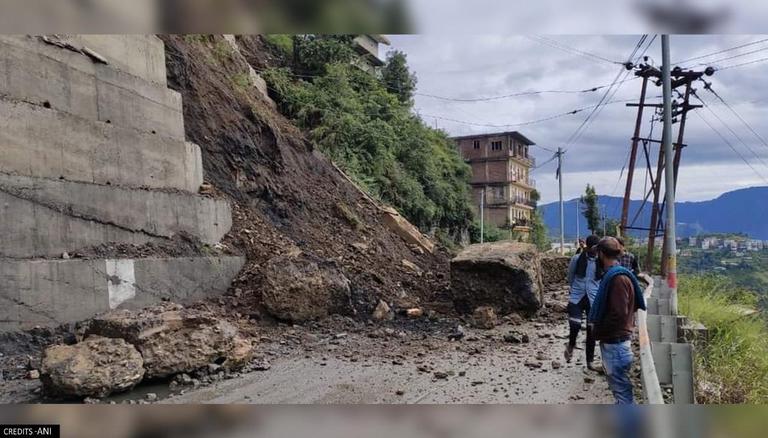 
The Mehli-Shoghi bypass road in Shimla has been closed for vehicular traffic on Monday in Himachal Pradesh. This was required owing to a landslide caused by the torrential rain. According to data from the State Disaster Management Authority, landslides have closed 22 connecting roads and three national highways in the state.

2 landslides were reported on Sunday, September 12, as well. The weather warning for Shimla on Monday states, “Generally cloudy sky with rain/Thundershower toward evening”. The Police also has put out a travel warning due to the roadblock.

Landslide reported in Beolia..Shoghi by pass road in Shimla.
*Please plan your travel accordingly.
*Men and machinery will remove the debris soon. pic.twitter.com/6HodSQm4bD

In recent times, a number of landslides have been witnessed in the state. Boulders fell on and destroyed the Mahila Mandal Bhawan in Punan village of the Nankhari region of the Shimla district on Sunday, September 12 as a result of heavy rainfall and landslides. The route between Nankhari and Khammadi has been shut owing to landslides caused by severe rain and landslides in the region. So far, no casualties have been recorded, and the road is expected to be repaired. Lalit Gautam, Nankhari Tehsil's Naib Tehsildar, confirmed this.

According to Ranjana Chauhan, the Punan village Panchayat Pradhan, three families from the village have been moved to the nearby Tehsil Bhawan as the region continues to be destroyed by rocks and landslides. Heavy rain caused landslides on the National Highway 305 near Shojha in the Kullu region of Himachal Pradesh on Sunday as well. This disrupted the traffic movement.  The landslide closed the National Highway 305 on Sunday morning, according to the Sub Divisional Magistrate of Banjar district in Himachal Pradesh, due to heavy rainfall in the area. However, no injuries or fatalities have been reported, and road restoration work is already ongoing, according to SDM.

Traffic update about District Solan..
*Landslide near Railway fatak at Sanwara on NH05.. Temporarily traffic is through one way.. pic.twitter.com/qhr4vbayTJ

The India Meteorological Department (IMD) of Himachal Pradesh had already issued a yellow rain alert for the period of September 9 to September 12. A number of districts, including Kangra, Hamirpur, Solan, Shimla, Bilaspur, Una, and Sirmaur, received severe rainfall. This was informed by the Director of State IMD. A landslide struck the state capital on September 2, causing three vehicles to be destroyed in the Dev Nagar district of Shimla City. A landslide between Aut and Pandoh in the Mandi district had previously shut the Chandigarh-Manali National Highway (NH-3) on August 28.