CDS Bipin Rawat's demise: School students in Jammu paid tributes to the Chief of Defence Staff, General Bipin Rawat, and 12 others who died in a chopper crash. 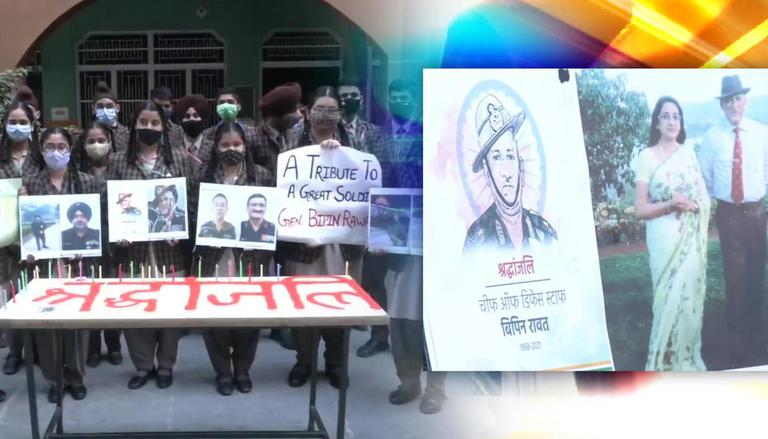 
School students in Jammu paid tributes to the Chief of Defence Staff General Bipin Rawat, his wife, and 11 others who died in a chopper crash near Coonoor, Tamil Nadu.

General Rawat was on his way to the Defence Services Staff College (DSSC), Wellington, when the Sulur Air Base Air Traffic Control lost contact with the Mi-17V5 helicopter, and an eventual air crash happened. The unfortunate incident has shaken the nation to its core, and the entire country is mourning the loss of the quintessential military commander.

On Thursday, Defense Minister Rajnath Singh extended his grief over the tragic incident and made a formal statement in the lower house of Parliament and provided brief details about the IAF helicopter crash that killed Chief of Defence Staff General Bipin Rawat and 12 others.

Jammu and Kashmir: Students of a school in Jammu pay tribute to CDS General Bipin Rawat, his wife and 11 others who died in a chopper crash near Coonoor, Tamil Nadu yesterday pic.twitter.com/UPFx3rPCS1

In a career spanning over four decades, General Rawat was the first tri-services chief who had played a major role in successfully carrying out various military operations including 2015 cross-border operation into Myanmar and 2016 surgical strikes following the terrorist attack on the Uri base camp of the Indian Army. He also successfully oversaw Indian attack on Jaish-e-Mohammad terrorist training camp and the operation against terrorists based in Jammu and Kashmir.

In a most unfortunate incident, a chopper carrying CDS Bipin Rawat, his wife, Dr Madhulika Rawat, and 11 members of his staff crashed near Coonoor in Tamil Nadu. 13 out of 14 passengers succumbed to their injuries in the air crash, while group Captain Varun Singh survived the accident.

Meanwhile, the Indian Air Force has ordered a tri-service probe into the matter, which will be headed by Air Marshal Manvendra Singh, Air Officer Commanding-in-Chief Training Command.