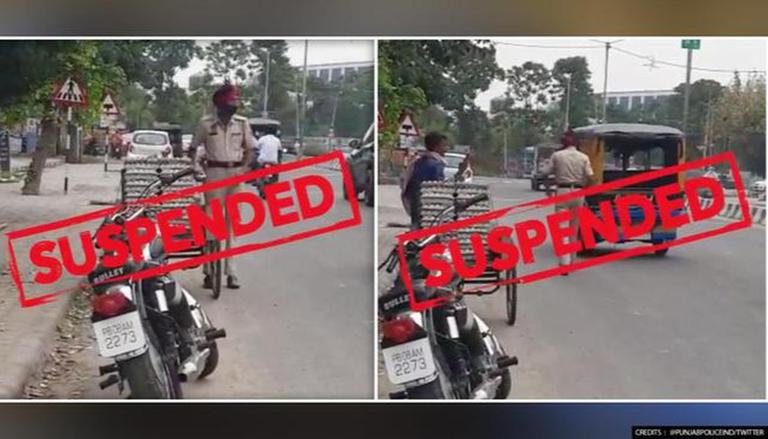 
A head constable in Punjab was caught on camera stealing eggs from a cart on a busy road in the state's Fatehgarh Sahib town, which is around 40 kilometres from Chandigarh. Taking to its official Twitter handle, the Punjab Police informed after the video went viral wherein HC Pritpal Singh was caught stealing eggs while the owner was away, the Police Departmental Enquiry was opened against him and he was suspended.

The viral visuals showed that the Punjab policeman, identified as Pritpal Singh was putting some eggs from an unattended egg-cart parked on the side of the road into the pockets of his police uniform. The video clip, apparently recorded on a mobile phone, further showed that the policeman quickly tried to cross the road as the owner approached the cart. He then signalled an auto-rickshaw to stop and went off with the eggs.

Earlier in May, a Station House Officer in Punjab was suspended for inhuman treatment after his shocking video emerged and went viral on social media. In the video, Navdeep Singh, SHO (City) Phagwarahe was seen kicking a street vendor's vegetable basket, prompting the police authorities to take action against him. Director-General of Police Dinkar Gupta called it unacceptable and suspended the SHO. Amid the rise in COVID-19 cases in the state, CM Captain Amarinder Singh-led Punjab government imposed partial lockdown in which only essential shops are allowed to function.

Absolutely shameful and unacceptable. I have suspended SHO Phagwara. Such misbehaviour will not be tolerated at any cost and those who indulge in it will have to face serious consequences,” DGP Gupta said in a tweet.

Police said Singh was seen damaging the property of a street-side vegetable vendor. Kanwardeep Kaur. Kapurthala Senior Superintendent of Police said as a member of a disciplined force such behaviour is against service rules and is unwarranted.

"The behaviour of the officer has brought a bad name to the entire force, she said. Taking strict action against the officer, he has been immediately placed under suspension. A departmental enquiry has been initiated against him",  Kanwardeep Kaur told PTI.

The police officers of Kapurthala Police have come forward and contributed from their salaries for providing compensation to the vegetable vendor.