India will use its voice at the high-level United Nations General Assembly to forcefully take up global issues such as terrorism, climate change, equitable and affordable access to vaccines, Indo-Pacific and UN reforms, the country’s envoy to the world organisation has said. 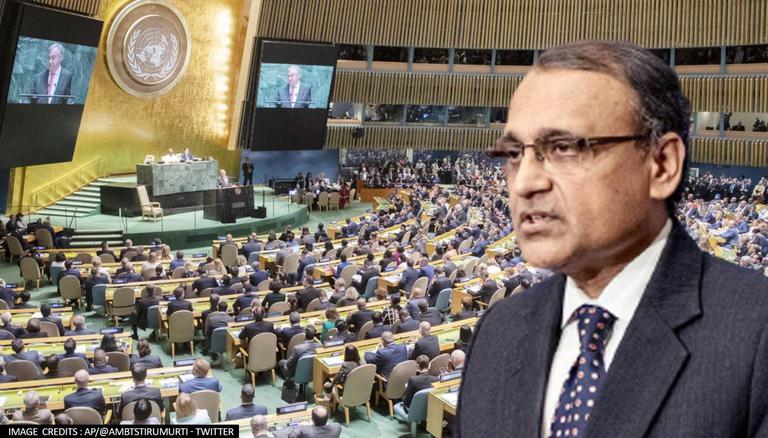 
India will use its voice at the high-level United Nations General Assembly to forcefully take up global issues such as terrorism, climate change, equitable and affordable access to vaccines, Indo-Pacific and UN reforms, the country’s envoy to the world organisation has said.

The COVID-19 pandemic and developments in Afghanistan are expected to dominate the 76th UNGA session, India’s Permanent Representative to the UN Ambassador T S Tirumurti told PTI in an exclusive interview. Apart from the COVID-19 pandemic and its humanitarian impact, other issues likely to dominate the high-level segment of the session include the global economic slowdown, terrorism and related issues, climate change, ongoing conflicts in the Middle East and Africa, recent developments in Afghanistan and UN Security Council reforms, he said.

The “76th UNGA is an important occasion for India for many reasons. There is an expectation that India, as the leading voice of the developing world as well as the current member of the UN Security Council, will use its voice to take up global issues forcefully.

“They include climate change, Sustainable Development Goals, equitable and affordable access to vaccines, poverty eradication and economic recovery, women’s empowerment and participation in governance structures, terrorism, peacekeeping/peacebuilding, Indo-Pacific and UN reforms. We will certainly do so, as we have indeed done so before as well,” Tirumurti said.

He said India has the ability to bring the discussions in the General Assembly to a more cooperative and constructive framework so that “we can, together with partners, oppose any divisive agenda which may be pushed or stop existing agenda being weakened”.

“This is a role India can play so that we continue to keep the focus on the major issues confronting the world and not let the discourse be hijacked to suit narrow interests,” he said.

The theme for this year’s General Debate is ‘Building Resilience through hope to recover from COVID-19, rebuild sustainably, respond to the needs of the planet, respect the rights of people and revitalise the United Nations’. Tirumurti said Prime Minister Modi’s speech at the General Assembly "is one of the most awaited among the world leaders. While what he decides to say is entirely his prerogative and I don’t want to second guess, the Prime Minister has always addressed some of the core issues confronting the world, and those of importance and concerns to us, including some of the achievements on the domestic front.”

India will participate in three high-level meetings organised by UN Secretary General Antonio Guterres on Climate, Energy and Food Systems. Guterres and UK Prime Minister Boris Johnson will hold a closed door Informal Climate Leaders Roundtable on Climate Action on Monday with a small and representative group of Heads of State and Government.

The roundtable “will be a chance for national leaders to demonstrate solidarity and ambition to keep the world’s 1.5C temperature goal within reach,” the UN has said. The UN Food Systems Summit on September 23 will set the stage for global food systems transformation to achieve the Sustainable Development Goals by 2030.

The high-level Dialogue on Energy on September 24 aims to advance action on the Sustainable Development Goal 7 of affordable and clean energy and towards net-zero emissions and universal access to energy. External Affairs Minister S Jaishankar and senior officials will be in New York starting Monday onwards, Tirumurti said. Jaishankar will meet his counterparts from several member states and participate in the G-20 meeting that will focus on Afghanistan and the G-4 Foreign Ministers meeting with a focus on Security Council reforms, he said.

The BRICS meeting, which also traditionally takes place on the sidelines of the UNGA session, is not taking place since not all BRICS Foreign Ministers will be present during the high-level week. Tirumurti said the ongoing COVID-19 pandemic continues to cast a shadow on this important annual gathering of world leaders.

“The slight improvement in the pandemic situation in the United States of America, and vaccination measures, has allowed the United Nations to organise the 76 UNGA General Debate in a hybrid format. However, it is far from a normal UNGA session,” he said.

Given that Afghanistan, climate change and COVID-19 are some of the key issues expected to be a centerstage during the UNGA, Tirumurti asked what India's focus will be in these areas -- said that on Afghanistan, Modi has already made India’s stand clear in his address to the Shanghai Cooperation Organisation Summit last week.

In his statement, Modi dealt some specific issues relating to the non-inclusive, non-negotiated transition of power; need for representation of all sections including women and minorities; impact of fundamentalism and instability on terrorism and extremist ideologies; increasing radicalisation; impact of uncontrolled flow of drugs, illegal weapons and human trafficking and the serious humanitarian crisis, Tirumurti said.

“We have also had an important resolution passed by the UN Security Council on August 30 under our Presidency which in many ways, sets out the benchmarks for the situation in Afghanistan.

“We will certainly highlight these issues and the need for the international community to address them jointly and effectively,” the Indian envoy said.

On climate change, Tirumurti said India is the only G-20 country which is on course to meet the Paris Targets. “We are second to none in fighting climate change and we will reinforce this during our meetings and demand more action from the developed countries by way of mitigation targets, climate finance and technology transfer,” he said.

On vaccines, India will reinforce the several initiatives it has taken to ensure vaccine equity and “ensure availability for the developing countries which have not yet been brought into this ambit.” “In the Security Council, we have so far played an important role in bringing our views and experience to bear on some critical peace and security issues facing us. We have served as a bridge to bring together opposing views,” Tirumurti added.