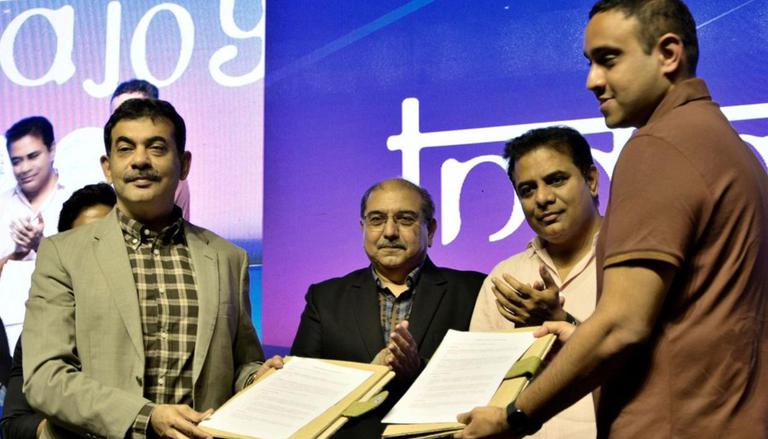 
Asia's largest digital entertainment festival themed 'Virtual is Reality', supported by Telangana government, commenced on November 16 in Hyderabad. The event witnessed participation from technology leaders from several countries, including the leading industry voices and representatives. The highlight of the event included an MoU signing between the Government of Telangana and the Mobile Premier League.

Under the MoU signed, Telangana will allot a dedicated 500 seat for Mobile Premier League in image Towers with an understanding from MPL to share technology know-how and hire local talent. The MoU was exchanged between Jayesh Ranjan is the Principal Secretary of the Industries & Commerce (I&C) and Information Technology (IT) Departments and Srinivas Kiran, Co-Founder and  CEO of Mobile Premier League.

In his address, IT Minister, Government of Telangana, KT Rama Rao said “This very event, I was confident that this will become a signature event for the image industry and then build a strong reputation as an aggregator of different domain events that used to take place separately. Success has been our homegrown champion show to being whose Netflix debut has gone on to set multiple records within Rajiv and the theme of Green Bowl.

45 companies have chosen Hyderabad as their destination in the gaming sector in the last two years making the total 80 getting companies, he mentioned.

A recent study has shown that India's active internet user base is expected to climb to 900 million by 2025, a 45% increase since the last year. The image sector itself is growing at 9% and is expected to reach rupees three lack growth or USD 44 billion. He added further added, by 2024, with a compounded annual growth rate of 13.5% this is staggering statistics with 900 million users, a growth of almost 13.5% very few sectors across the world achieve.

Telangana VFX, Animation and Gaming Association (TVAGA) President Rajiv Chilaka in his address said “The pandemic has given us an opportunity to create IndiaJoy 2021 and bring the tech community together on a wider, far impacting stage, with a click of a button,” He added “IndiaJoy this year highlights ‘Virtual is a Reality”, and the foundation of this biggest digital entertainment festival – innovation, networking, collaboration – remains ever strong and robust.” Rajiv said.

“2020 was tough for the industry including ours, while gaming animation, VFX suffered because shooting stopped. The industry witnessed a decline of 10% growth. But the good thing is that companies invested into R&D and IP and innovated the current business plans, which will yield great results in the future.” Rajiv Chilaka added.

A panel discussion by leading influencers on social media was conducted. The topics were- “How to create engaging content, and monetizing Content” and "How Technology & esports made sports practice & mastery easy", wherein Tennis Player Leander Paes had addressed the gathering.

IndiaJoy is an amalgamation of world-leading digital entertainment technologies that brings the best of VFX, Animation, OTT, Games, Movies, TV, Comics, Animation, and Culture from the world.

To attend the digital event, please register at https://indiajoy.in/