Premium Indian domestic airline, Air Vistara, later deleted the tweet after the airline was on the receiving end of hate from 'liberals'.

Premium Indian domestic airline, Air Vistara, posted a picture on their social media account stating they were honoured to have Major General G D Bakshi (Retd.) onboard and thanked him for his service to the nation. However, it later deleted the tweet after the airline was on the receiving end of hate from 'liberals'. 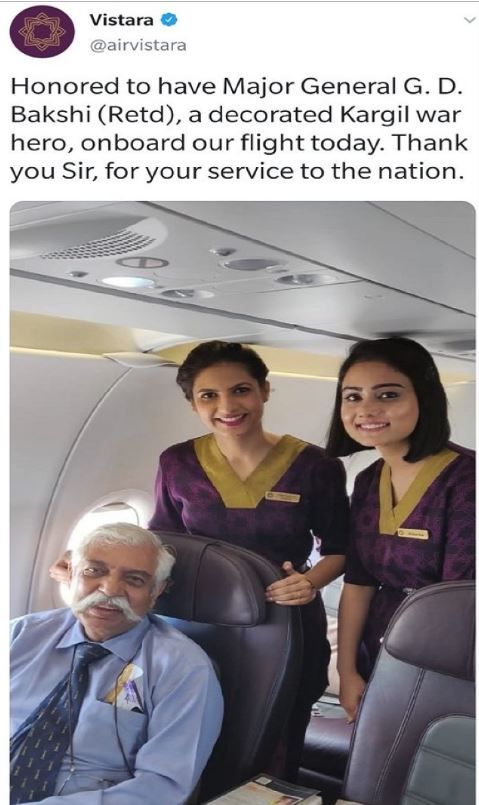 In the tweet which featured a picture of Major General Bakshi along with two air-hostesses, Vistara said that it was honoured to have the General on board and thanked him for his service to the nation.

Major General G D Bakshi is a very decorated retired army officer who was awarded the Vishisht Seva Medal for his exemplary role in the Kargil war. He was also awarded the Sena Medal for counter-terrorism efforts.

Such a gesture by Vistara though became unpalatable for some Indian ‘liberals’ and journalists who condemned the tweet and even went to the extent to vow that they would never fly the airline again.

Read: Pakistan Feared War Upon Them If They Did Not Release Wing Commander Abhinandan, Writes Major General GD Bakshi