Calling out former Congress President Rahul Gandhi's misleading remarks in relation to "Chinese construction of a bridge on Pangong Lake," a senior Indian Army officer verified the facts and slammed any such claims. Stating that the said construction is nowhere close to the alleged flashpoint between India and China, in addition to the disputed Galwan Valley, Lieutenant General Menon clarified the bridge is being built "deep inside Chinese territory".

Essentially directed at Rahul Gandhi, Lieutenant General Menon shared on Twitter, "The construction is 30 kms from LAC...deep inside Chinese territory." 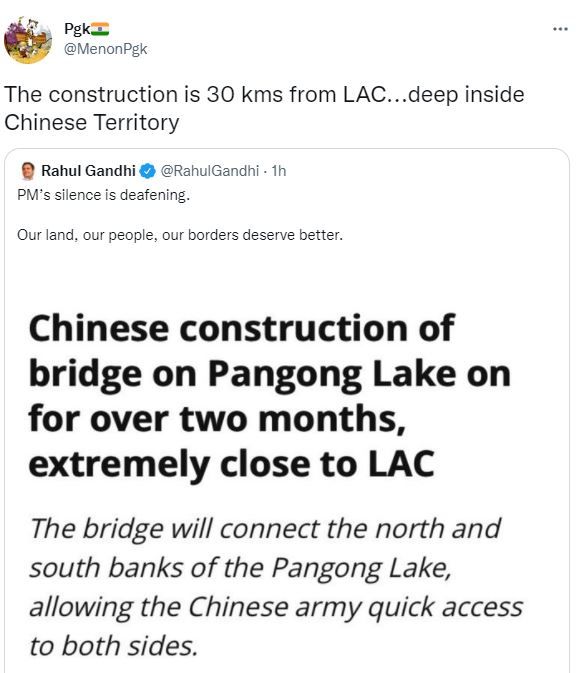 It is pertinent to note that Gandhi, unaware of verified facts, shared hearsay updates via Twitter. While critics have called out his tendency to share misinformation that is detrimental to India, the India Army rubbished all claims by stating the construction is 30 km away.

Taking to Twitter, Gandhi attempted to pin the onus of fake news on the Prime Minister while reeking of his ill-political motives and absolute disregard of the sentiments of the country, moreover the Indian Army. Trying to take on PM Modi, Gandhi accused the Head of State of being silent over a piece of fake news shared by himself. 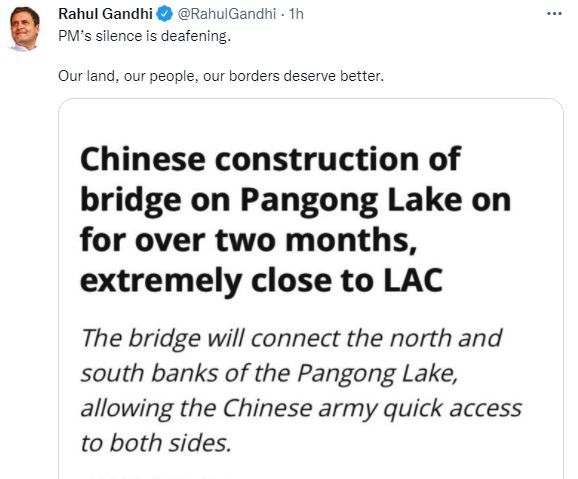 On Saturday, China released a propaganda video showing the Chinese flag at Galwan Valley. This development comes after China passed a controversial land border law in October 2021, that came into effect on 1 January 2022, in a push to improve border control and protection.

Retaliating to the propaganda, 3 days after China's video, pictures have emerged of a group of Indian Army soldiers proudly hoisting the tricolour in the Galwan Valley on New Year's Day. The photos released by Union Law and Justice Minister Kiren Rijiju are perceived as a powerful counter to a video shared by the Chinese Communist Party mouthpiece Global Times on 1 January.

Brave Indian Army soldiers in Galwan Valley on the occasion of #NewYear2022 pic.twitter.com/5IyQaC9bfz