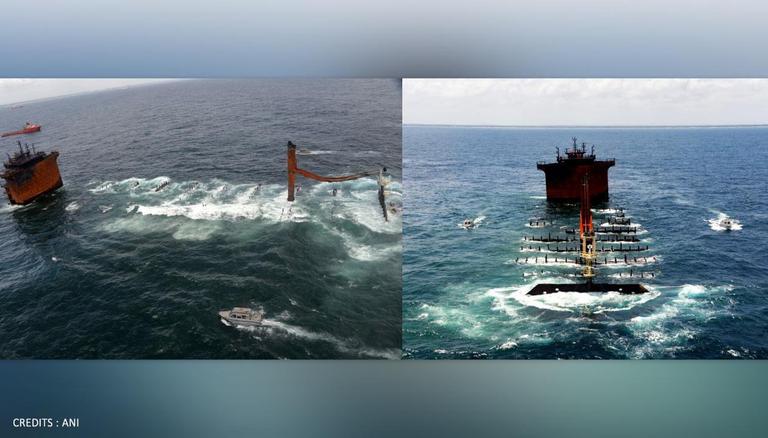 
The Indian Navy has deployed Hydrographic Survey ship INS Sarvekshak, upon request of the Government of Sri Lanka, to carry out an extensive underwater search operation around the sunken ship MV X-Press Pearl.

The X-Press Pearl reported an onboard acid leak that caught fire just when it was due to enter the Colombo harbour on May 20. The fire could be put out only after 13 days of prompt and intense efforts including by the Indian Navy and Coast Guard. The massive fire at MV X-Press Pearl is perceived as the worst marine ecological disaster by Sri Lanka's top environment body in the history of ecological disasters in the country. The cargo vessel MV X-Press Pearl was carrying a consignment of chemicals and raw materials for cosmetics from Hazira in Gujarat to Colombo Port.

The Sri Lankan Navy had sought India’s assistance for firefighting as well as pollution control in the Indian Ocean. The Government of India immediately deployed its assets.

Under the Southern Naval Command, INS Sarvekshak is a hydrographic survey ship in the Indian Navy. Apart from a helicopter, the ship is equipped with four survey motor boats and two small boats. The ship was the runner-up in the 2015 Innovation Trophy given out on Navy Day as an operational unit by PM Modi.

Taking to Twitter, the Indian Navy's official spokesperson account informed that considerable quantities of submerged remnants of the hull have been detected during the underwater survey.

The Navy stated that while the aquatic survey has been progressing with naval survey boats, a chopper is carrying out aerial military observation of the region in coordination with the National Aquatics Resource Research & Development Agency (NARA) and Hydrographic Office, Sri Lanka Navy.

Earlier this month, the Sri Lankan Defence Secretary acknowledged that the Indian side held productive involvement pertaining to furthering close cooperation in defence and security spheres of both countries. Sri Lankan officials in the recent past lauded rapid response plus support extended by the Indian Coast Guard vessels to douse the fire triggered onboard merchant vessel X-Press Pearl.

Attention has also been drawn to aspects of the smooth functioning of a long-existing military training exchange between Sri Lanka and India.

As MV X-Press Pearl sank on June 3, Sri Lankan authorities scrambled to lead a response on the aftermath of the worst possible maritime disaster that they feared was likely to happen close to the country’s main port. According to the Sri Lankan authorities, there were about 300 tonnes of oil on board the ship as it started burning on May 20. Most fuel is speculated to have been consumed in the massive fire that broke out, the cause of which is as-yet unknown. X-Press Pearl was carrying just under 1,500 containers, with 81 of those containers described as “dangerous” goods.

Other southeast Asian nations' governments announced the vessel that burnt for nearly two weeks has posed oil spill hazard risks to the fishing and oceanic ecosystem. It engulfed the coastline in tonnes of plastic pellets, and debris, prompting the Sri Lankan administration to ban fishing 50 miles along the coastline. Millions of bead-like bits of plastic washed ashore on the Pamunugama beach, north of the capital, in Colombo which is located bang opposite to the anchored and sunken X-Press Pearl.