Similar to questioning the surgical strike, the opposition has now asked for evidence of the air-strike that was conducted by the Indian Air Force in Balakot, Pakistan on Jaish-e-Mohammed camps, which has now padded the Pakistani narrative against the Indian government as disseminated by the Pakistani media.

Similar to questioning the surgical strike, the opposition has now asked for evidence of the air-strike that was conducted by the Indian Air Force in Balakot, Pakistan on Jaish-e-Mohammed camps, which has now padded the Pakistani narrative against the Indian government as disseminated by the Pakistani media.

Pakistan, that has not only admitted of being in touch with Jaish-e-Mohammed chief Masood Azhar, but denied claims of their involvement in the Pulwama attack was seen reiterating the Opposition parties as their media denounced BJP for spreading hate, 'jingoism' for reaping electoral benefits ahead of Lok Sabha 2019 elections, entirely overlooking the issue of Pakistan's terror-links.

The Pakistani media emphasised on how the Opposition parties in India have rejected 'anti-Pakistan narrative' and that Congress leader P. Chidambaram has also called for talks, amid escalating tensions.

Speaking in Patna on Sunday, Prime Minister Narendra Modi had accused the Opposition of demoralising the security forces and assisting Pakistan in pedaling its agenda:

"At a time when the security forces are attacking terrorists in the country and across the border, a few people from the country, rather than motivating our Jawans, are making statements which are making our enemies smile."

Moreover, the Pakistani media also lauded their Prime Minister Imran Khan's move to release Wing Commander Abhinandan from the Pakistani custody as a 'peace gesture', a move that they say was even hailed by Indian opposition parties, specifically naming Congress leader Digvijay Singh.

Whereas, Pakistan was compelled to release IAF officer under the Geneva Convention that obligates protection for prisoners of war.

The opposition's 'politicisation' and call for 'proof'

Days after the attack, at an all-opposition meeting in New Delhi on Wednesday - shortly after Pakistan violated India's airspace and attempted to attack Indian military installations using its F-16s - the opposition had issued the following statement: 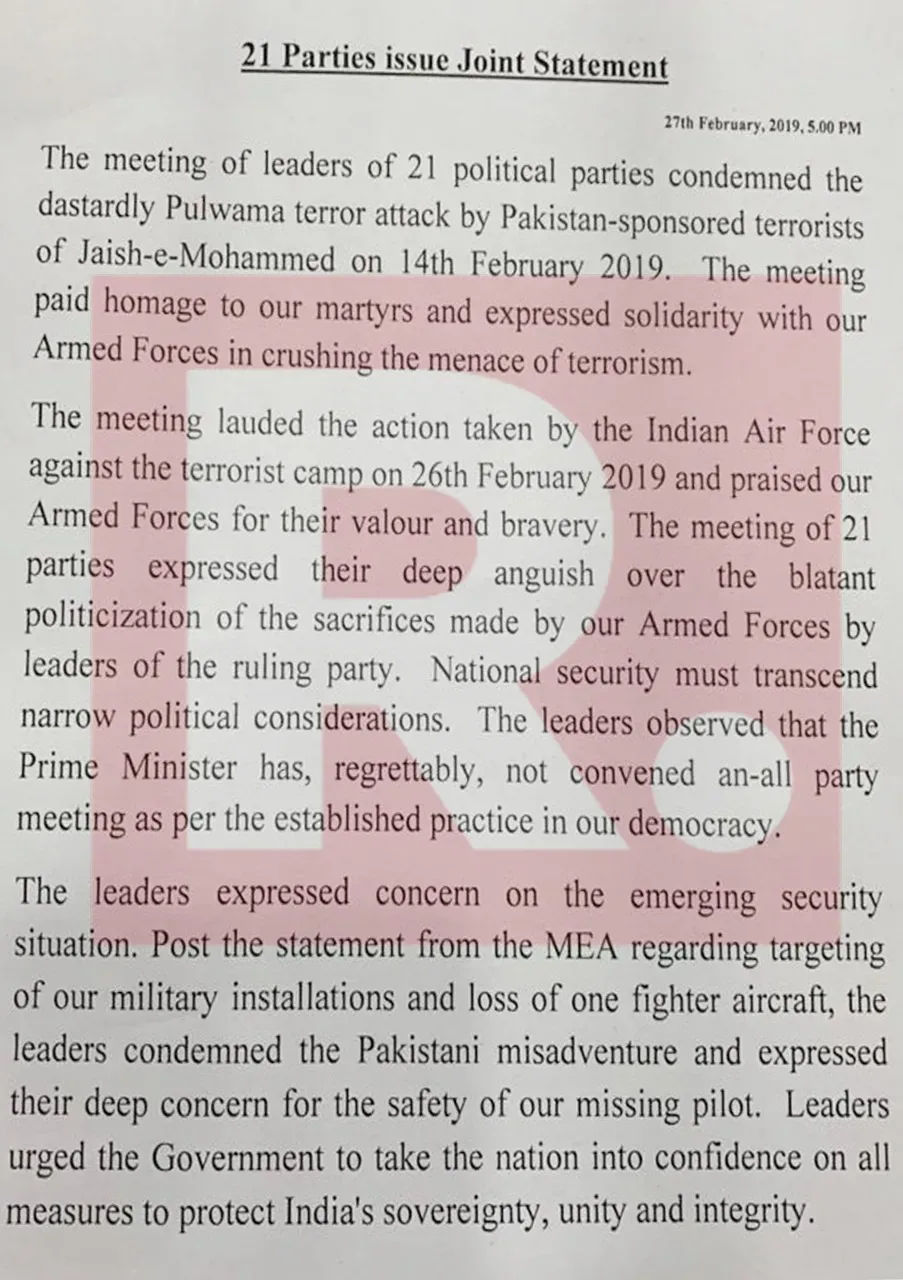 Leveraging this opportunity to portray a conflicted India on the strikes, Pakistani media quoted Rahul Gandhi saying "PM Narendra Modi has 'questioned' the recent anti-terror air strikes in Pakistan by his remarks."

Meanwhile, senior Congress leader P. Chidambaram raised a question over the number of casualties in the pre-emptive air strikes, quoting IAF Vice Air Marshal who 'declined to comment on casualties'

And another senior leader, Kapil Sibal on Monday asked if the international media who reported 'no proof of militant losses at Balakot' is pro-Pakistan? Moreover, questioned if PM Modi was 'guilty of politicising terror?'

reporting no proof of militant losses at Balakot pro-Pakistan ?

You are guilty of politicising terror ?

TMC supremo Mamata Banerjee seeking details cited that her cyber team claimed there had been no casualty suffered by the air-strikes.

She said, "From the very beginning, we have been hearing on national television channels that 300-350 persons have died in the air strike. We want to know how many people actually died. Did anyone die at all? Where were the bombs dropped? Were the bombs dropped in the right place?"

The chief minister of Delhi, Arvind Kejriwal questioned if the tensions were orchestered deliberately between India and Pakistan for political gains.

He said, "The country cannot tolerate that when there is tension with Pakistan our Prime Minister is busy with strengthening booth. BJP is counting corpses and seats. Was all this on the Indo-Pak border done by you for it?"

He further accused BJP president Amit Shah of 'falsely speaking' and claiming that 250 terrorists have died despite the number confirmed by the Defence Chiefs in the press brief. 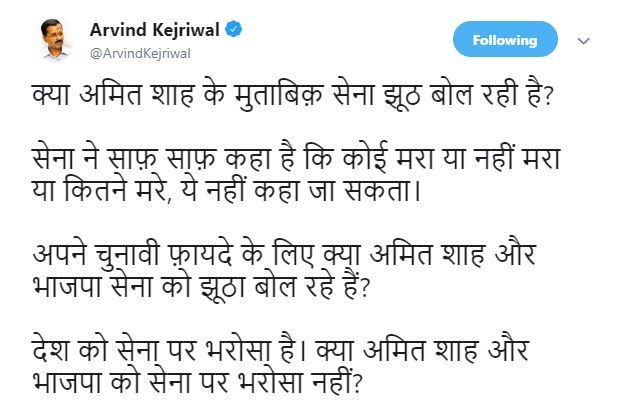 In the midst of the ongoing tensions between India and Pakistan after the IAF's strike against Pakistan-backed terror across the LoC, Finance Minister Arun Jaitley, while hitting out at India's Opposition over its various statements on the matter, has issued specific criticism for what was said on the topic by former Prime Minister Manmohan Singh.

At a time when the country stood in solidarity with the defence forces, the martyred and their families, the Centre accused the Opposition of hurting 'national interest', for questioning the credibility of both, the government and the Air Force, furthermore 'discrediting India's operation against terrorism'

These statements made by opposition parties hurt India’s national interest. They give smiles to Pakistan and become an instrument in Pakistan’s hands to discredit India's operation against terrorism.

"The most disappointing & objectionable statement was of the former Prime Minister Dr. Manmohan Singh. He stated that he was disturbed with the “Mad rush of mutual self-destruction” by the two nations. According to him perpetrator of terrorism & its victim are both at par."

#WATCH: Ex-PM Manmohan Singh, "On a day when our country is grappling with another crisis of mad rush of mutual self destruction played b/w India-Pak. Our basic problem is to get rid of chronic poverty, ignorance&disease which still afflicts citizens in our 2 countries... (27.02) pic.twitter.com/H1OJcyi3Rk

The questioning comes despite the Indian Air Force stating in as many words when asked about the air strike on the JeM-LeT-HM's Balakot joint terror factory. Addressing a joint-briefing of the Indian Army, Navy and Air Force, Air Vice Marshal RGK Kapoor had said:

"There is fairly credible evidence with us which proves that there was damage to the camps. Weapons hit the intended target and that they caused the damage that was intended."

The Air Vice Marshal had added: