Collaborative efforts by the Centre and the states continue the trend of less than 50,000 daily new cases that are being reported for the 68th consecutive day. 
The Ministry of Health and Family Welfare on Friday claimed that on its 281st day of the vaccination drive, it has administered approximately 67 Crore vaccine doses. According to the data released by the Ministry, India's vaccination coverage has surpassed a cumulative total of 67.09 Crores (67,09,59,968) as per provisional reports till Friday morning. The administration injected a total of 74,84,333 vaccine doses into people on Thursday, September 2.

"India’s cumulative vaccination coverage has crossed 67 Crore landmark today. With the administration of 74,84,333 vaccine doses in the last 24 hours, India’s COVID-19 vaccination coverage has surpassed the cumulative figure of 67.09 Cr (67,09,59,968) as per provisional reports till 7 am today. This has been achieved through 70,34,846 sessions," the Ministry of Health and Family Welfare stated in a statement.

The Union Government has been committed to accelerating the pace and expanding the scope of COVID 19 vaccination throughout the country. The recovery of 34,791 patients in the last 24 hours has increased the cumulative tally of recovered patients since the beginning of the pandemic to 3,20,63,616. Consequently, India’s recovery rate stands at 97.45%. Collaborative efforts by the Centre and the States along with the Union Territories continue the trend of less than 50,000 daily fresh cases that is being reported for 68 consecutive days now. Meanwhile, India reported 45,352 new cases in the last 24 hours. 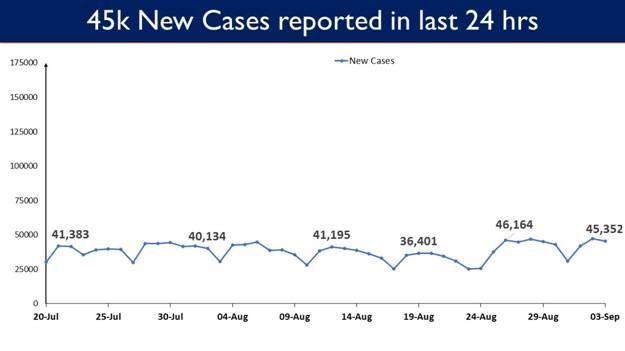 The active caseload is presently 3,99,778 and presently constitute 1.22% of the country's total positive cases. 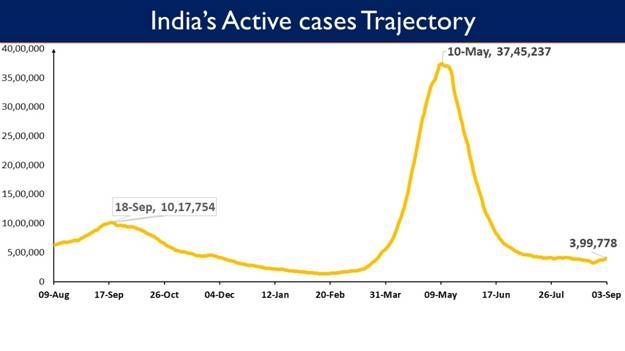 Meanwhile, the Ministry of Health Affairs has instrumentally expanded the capacity of tests being carried across the country. During the last 24 hours, a total of 16,66,334 tests has been being conducted. India has so far conducted over 52.65 Crores (52,65,35,068) cumulative tests, the MoHA stated on Friday.

While testing capacity has been enhanced across the country, Weekly Positivity Rate at 2.66% remains less than 3% for the last 70 days now. The Daily Positivity rate stands at 2.72% and has remained below 5% for 88 consecutive days now. 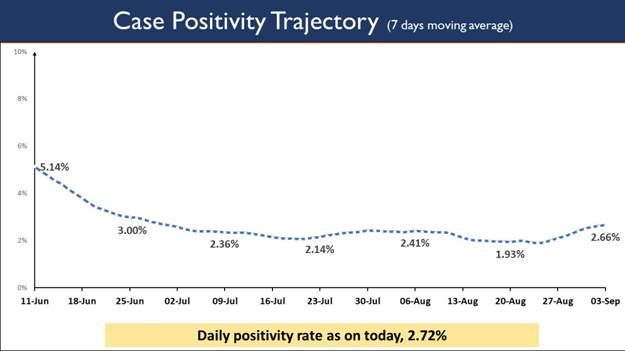