Acknowledging India's milestone, the WHO congratulated the country and its administration for scaling up the COVID vaccination drive at an unprecedented pace. 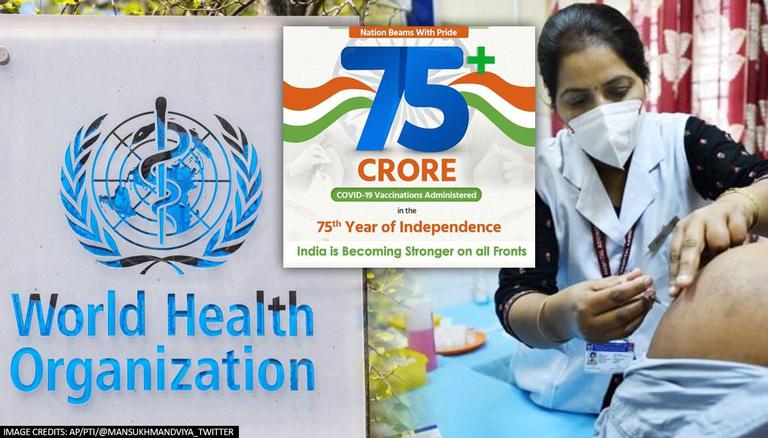 
Conquering yet another milestone, India on Monday reached the figure of 75 crore total COVID vaccine doses dispensed. Acknowledging India's achievement, the World Health Organization congratulated the country and its administration for scaling up the vaccination drive at an unprecedented pace. Dr. Poonam Khetrapal Singh, Regional Director of WHO in South East Asia, in a statement pointed out that the country administered over 100 million doses in a short span of 13 days.

Taking to his official Twitter handle, Minister of Health and Family Welfare (MoHFW) Mansukh Mandaviya first broke the news. Outlining that India has administered 75 crore doses in its 75 years of India's Independence, Mansukh Mandaviya credited Prime Minister Narendra Modi's 'Sabka sath, sabka prayas' principle for the same. He exuded confidence that with the same principle, India will continue achieving milestones in its vaccination drive one after the other.

Minister of Information and Broadcasting of India Anurag Thakur also expressed his joy on this significant milestone. Not forgetting to mention that India has developed not just one but two vaccines against COVID-19, Anurag Thakur outlined that the 75-crore mark was a big achievement. "While PM provided vaccines for free, people have participated with enthusiasm on Vaccination," the Minister of Information and Broadcasting said, adding that presently India is leading as far as vaccination is concerned.

Slamming all those who tried to politicize the vaccination process, he added," We will get freedom from COVID with the help of vaccines."

Congratulations to the people of India 🇮🇳!

WE RECOMMEND
In major U-turn, England ditches COVID vaccine passports in crowded places after backlash
Who is Elizabeth Holmes? Rise and fall of Theranos founder on trial for criminal fraud
Bharat Biotech's COVAXIN to get emergency use approval from WHO by next week: Sources
US likely to authorize Pfizer COVID vaccine for kids age 5-11 by October: Former FDA Chief
'We never forget', says Joe Biden; pays tribute to those who lost their lives in 9/11