On Monday, the Director-General of the Indo-Tibetan Border Police (ITBP) kicked off the fourth phase of the force's longest cycle ride from Delhi 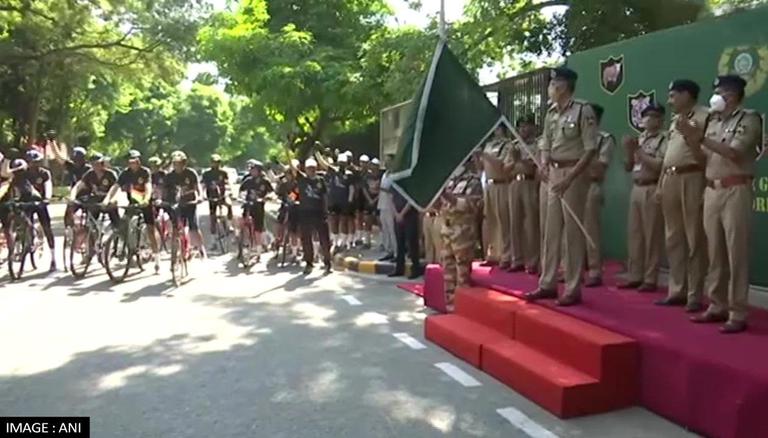 
On Monday, the Director-General of the Indo-Tibetan Border Police (ITBP) kicked off the fourth phase of the force's longest cycle ride from the National Police Memorial in Delhi. This rally will travel 2,700 kilometres from Gogra (Ladakh) to Kevadia (Gujarat) to take part in the National Unity Day Parade on October 31. The cycling rally began on August 27 at 4,500 metres in Ladakh and travelled through tough weather and geographic conditions before arriving in Manali via the Atal Tunnel.

Marsimik-La (5,582 metres), Changla (5,319 metres), Tanglang-La (5,328 metres), Baralacha-La (4,892 metres), and Lachung-La were among the high motorable passes covered by the rally (5,059 metres). In the following 25 days, the 45-member ITBP cycle rally team will finish the 1,100-kilometer journey to the Statue of Unity, travelling through Delhi, Haryana, Rajasthan, and Gujarat. The ITBP's contribution to the awareness campaigns and outreach programmes through the cycle rallies under the umbrella of the 'Azadi Ka Amrit Mahotsav' over the 75-week campaign, according to the DG ITBP, Sanjay Arora, has been inspiring.

According to Arora, the force will continue to serve the country with the same zeal and passion, and will do everything possible to ensure the country's security and service, as stated in its slogan, 'Shaurya, Dridhata, Karmanishtha'. En route, the rally will host a number of patriotic theme-based programmes under the umbrella of 'Azadi Ka Amrit Mahotsav.' On the way, it will stop at historical sites associated with the independence movement and freedom fighters. Aside from plantation drives, the cycling rally will raise awareness about the Fit India Movement, Swachh Bharat Abhiyan, and other initiatives.

India's major border patrol organisation for its border with China's Tibet Autonomous Region is the Indo-Tibetan Border Police. It is one of India's five Central Armed Police Forces, established under the CRPF Act on October 24, 1962, in the aftermath of the Sino-Indian War of 1962. Civil medical camps, disaster management, and nuclear, biological, and chemical situations have been trained for by the ITBP. Members of the ITBP have participated in UN peacekeeping missions in Bosnia and Herzegovina, Kosovo, Sierra Leone, Haiti, Western Sahara, Sudan, Afghanistan, and other countries. The ITBP has two battalions assigned to the National Disaster Response Force.