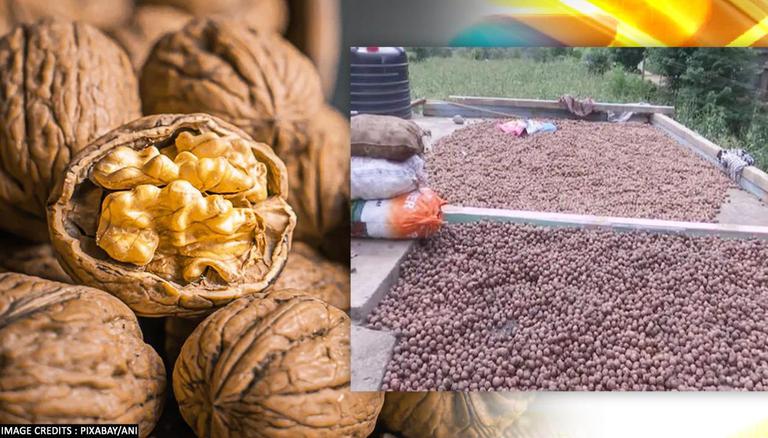 "There are two zones in Rajouri district-- subtropical and temperate. We grow crops like citrus and mango in the subtropical zone. In the temperate zone that includes Kotranka Budhal, Thanamandi and Manjakot, walnut harvesting is going on right now," he stated. "A premium quality of walnut, Kagzi (paper-shell) walnut is grown here in an organic way. There is no use of fertilisers and pesticides," he added.

According to Khan, the horticulture department encourages the planting of various crops through various schemes. "We give subsidy on various facilities like irrigation, machinery and vermicompost for organic farming," he noted.

The officer went on to explain that the walnut crop in the district has a lot of potentials and pays well. "Earlier, we used to give seeded plants to farmers that take 10 years to bear fruit, but now we have shifted to grafted plants that bear fruits within four to five years," he mentioned.

Budhal Shah Mohammad, a walnut grower in Kotranka, stated that despite the fact that Kotranka is a hilly terrain, numerous crops such as apples, walnuts, and corns are grown here. "A bumper crop of walnuts has been produced this year. We grow different types of walnuts that are stored separately," he said. "It takes a lot of hard work from contractors and labourers to grow walnut, so we would like to urge the government to facilitate the sales of the crops by establishing a fruit mandi here," he added.

READ | Every adult in J-K's Samba received at least one dose of Covid vaccine: Official

He also stated that the COVID-19 epidemic had a negative impact on walnut sales last year. "We faced losses as the walnut produced last year is still stored. So we are expecting support from the government in form of some compensation," he informed.