Weeks after the Union government integrated Jammu and Kashmir with the rest of the country by abrogating Article 370 and 35A, the Centre and J&K govt are making efforts to create awareness among the citizens of J&K about the benefits that would be extended to the newly-formed Union Territory.

The J&K government has published pamphlets that would be carried in newspapers across the UT to create awareness among the people about how the abrogation of the Article 370 would ensure the implementation of a single Constitution throughout the entire country.

The pamphlets detail about the important decisions taken by the government for J&K, along with the abrogation of Article 370 and 35A, and substantial modifications and other important changes made for the Union Territory. It further highlights how Article 370 and 35A have been responsible for the backwardness of J&K. The pamphlet notes that the two laws kept the state isolated from the development processes in the country for a long time.

“For many years in the past, the state of Jammu and Kashmir has been the victim of anti-national propaganda and terrorist action against innocent citizens. Article 370 and 35A became handy tools for mischievous elements to fan separatism and promote terror. The special status benefited only a select few. Despite massive fund allotment, there was only limited improvement in the condition of the poor and disadvantaged," the pamphlet read.

Highlighting that even though the Parliament passed a number of progressive laws for the benefits and welfare of the people of the country, the pamphlets state that most of the laws could not be extended to Jammu and Kashmir. People were denied benefits that are available to all other citizens in India in the shadow of Article 370 and 35A, the pamphlet further states.

Meanwhile, after the abrogation of Article 370, the Gujjars-Bakerwars community in J&k, which constitutes 12 per cent population with no reservation, will be able to avail the benefits of political reservation through quota in assembly seats like the rest of the country. It has also been asserted that the revoking of the laws from J&K has resulted in ending gender discrimination with women will be able to all fundamental rights. Investment will be allowed in the UT, leading to development and employment generation which will also boost tourism in J&K.

“Property and all other rights of women marrying outside the state will now be fully protected. So many women from the state have married and settled in other parts of the country and even abroad, all such women will now retain full and legal rights on the land among other rights," the pamphlets said. 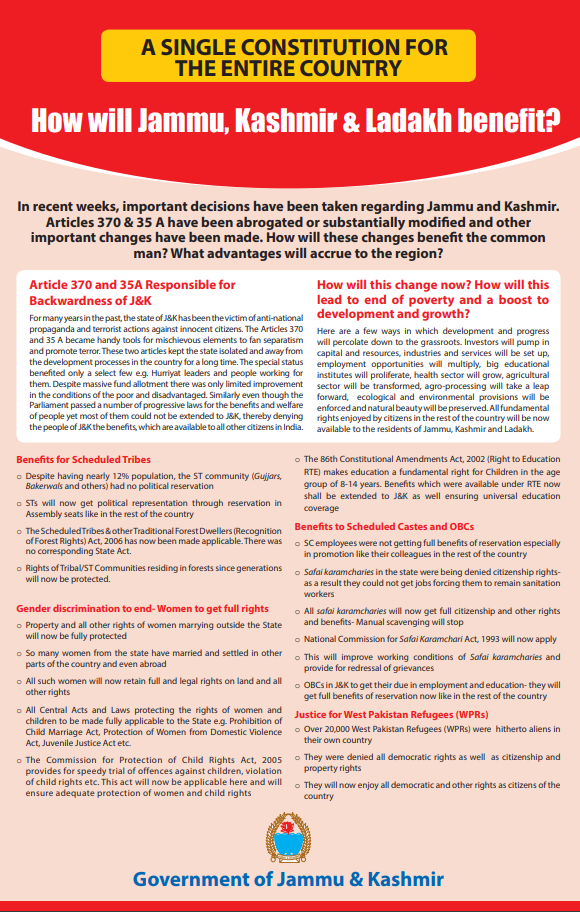