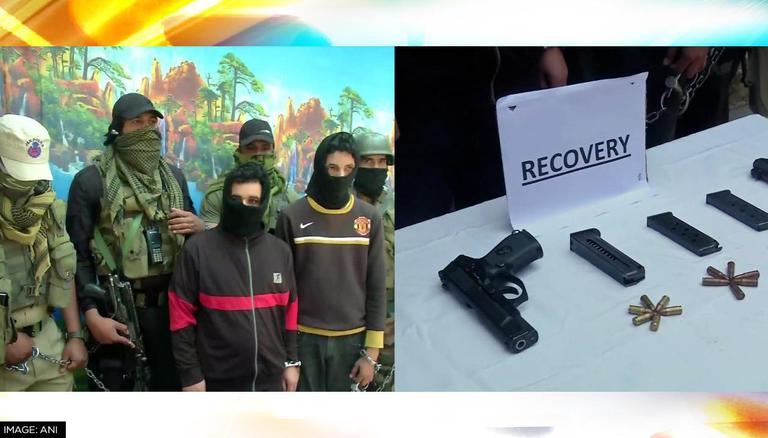 
In a huge success in the fight against terrorism, security forces in Jammu and Kashmir's Baramulla have arrested two local youths who had recently joined the banned terror organisation Lashkar-e-Taiba (LeT). In a joint operation by J&K police and the Indian Army, two youths were arrested from the Pattan area of Baramulla and arms and ammunition were recovered from their possession.

Speaking to reporters over the arrest of the LeT terrorists, SSP Baramulla, Rayees Mohammad Bhat, said, "Police and Army got a huge success in the Pattan area. We got a report last month on the 9th that Irfan Ahmad Mir was missing. In the investigation, it was revealed that Mir joined Lashkar-e-Taiba (LeT). The effort is to first get the new recruits back. We tried our best to get this youth. However, another youth Zahid also went missing. He was lured by LeT too. He joined the terrorist outfit as well. Our intelligence activated and we got success after that."

Giving further details, SSP Bhat said, "We received info that these 2 youth were active here. They were targetting minority community members here. The joint team (Army and J&K police) activated. We put an ambush and these two came from the front and were challenged by us. We gave a controlled response considering these were new recruits. We chased and apprehended them."

'Not only avoided attacks but got back misguided youths': J&K police

The Baramulla SSP, while addressing a press conference on the arrest of the two local youths who joined the terror organisation LeT, said that they recovered arms and ammunition from them. He informed that the security forces not only prevented terror attacks but also brought back the misguided youths.

"We recovered 2 pistols and 18 live rounds, 3 magazines from them. We not only avoided the attacks but also got back 2 misguided youths. The investigation reveals that handlers were not only involved in North Kashmir, but also in South Kashmir," Bhat told reporters.

Security forces in Jammu and Kashmir (J&K) recovered an Improvised Explosive Device (IED) in the Putkha area of Baramulla's Sopore on Saturday. According to reports, security forces had cordoned the area while a Bomb Detection and Disposal Squad (BDDS) team arrived at the spot and defused the recovered IED.

The IED was recovered in a joint operation by J&K police and 52 Rashtriya Rifles of the Indian Army. As part of the joint operation, security forces were conducting a search in the Putkha area in North Kashmir's Baramulla on Saturday when the explosive was recovered. Immediately after recovering the IED device, BDDS was called in to defuse the bomb. Higher authorities also reached the spot to take note of the situation and later the explosive device was naturalised.