After ordering the suspension of class-work in all educational institutions a few days ago, the district administration in Baramulla and Kupwara has now asked the teaching staff to remain off duty from Thursday. The decision has been taken as a preventive measure to avoid gathering at public places. Also, the administration has imposed section 144 CrPC in the district which disallows assembly of more than five people at any public place.

“All the educational institutions to remain shut till 31st March from today onwards. Teachers and staff advised to stay at home and practice social distancing in view of COVID 19,” Deputy Commissioner Kupwara said in a public notification.

He said there was no requirement of issuing a separate order for school teachers. “Obviously, when they are not allowed to assemble at any school they should remain at home,” he said. 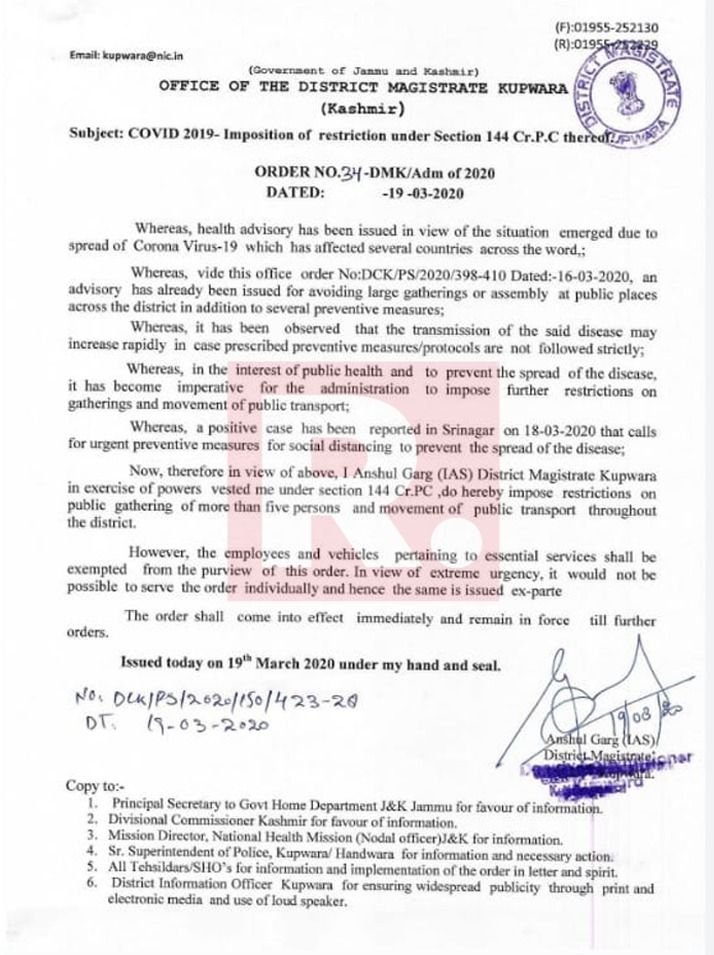 Meanwhile, Eighty-one passengers of an Air India Leh-Srinagar flight were quarantined on their arrival. The flight was then diverted back to Leh where it dropped the remaining 25 passengers, officials said.

District Magistrate Srinagar, Shahid Iqbal Chowdhary has also ordered restricted entry of travellers from Leh and Kargil areas to Srinagar. The order states that only those travellers can enter Srinagar who has undergone quarantine for the specified two-week period immediately before the intending date of travel and certified and cleared by the competent medical authority in Ladakh.

Travellers from the region who will not have undergone quarantine in their region will have to undergo quarantine in Srinagar before being allowed to proceed to their desired destinations, the order said.

The order also applies to road travellers from the region. The ferrying of passengers in Indian Air Force aircraft has been suspended altogether till further notice. It is pertinent to mention that the deadly coronavirus has finally reached Valley with one resident from old downtown of Srinagar testing positive. Reports suggest that the infected person is around 65 years old woman who had returned recently from Saudi Arabia.