External Affairs Minister S Jaishankar on Thursday met many of his counterparts from the Commonwealth countries here and exchanged views on major international issues and measures for further strengthening cooperation with their countries. 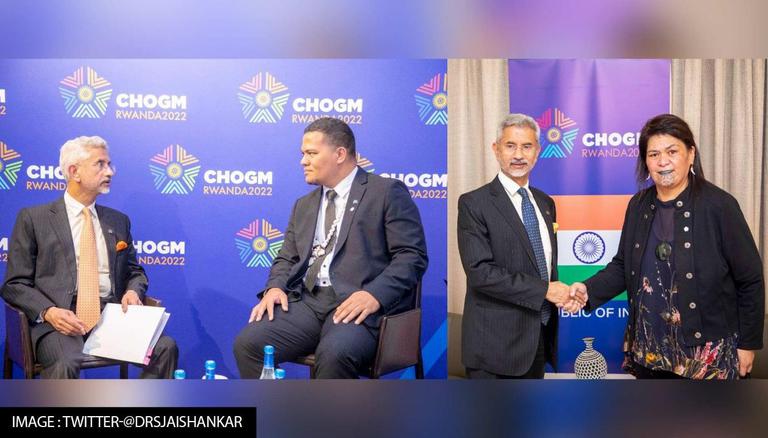 
External Affairs Minister S Jaishankar on Thursday met many of his counterparts from the Commonwealth countries here and exchanged views on major international issues and measures for further strengthening cooperation with their countries.

Jaishankar arrived here on Wednesday on a four-day visit to attend the 26th Commonwealth Heads of Government Meeting (CHOGM). He will be representing Prime Minister Narendra Modi at the summit on June 24-25.

During his meeting with New Zealand Foreign Minister Nanaia Mahuta, the two leaders exchanged views on the agenda of the Commonwealth Summit and discussed strengthening bilateral ties, especially its people-to-people aspects.

Jaishankar and his South African counterpart Naledi Pandor discussed the international situation and agreed that India and South Africa must together uphold the interest of the Global South.

"Great as always to spend time with FM Naledi Pandor of South Africa. Discussed the international situation with her. Agreed that India and South Africa must together uphold the interest of the Global South," Jaishankar tweeted.

Jaishankar said that India is strongly committed to advancing its Pacific Islands cooperation.

"And FM of Brunei Haji Erywan Yusof, Minister for Defence Industry and International Development and the Pacific, @PatConroy1, FM @VivianBala of Singapore, FM Frederick Mitchell of The Bahamas, FM Hugh Todd of Guyana," he tweeted.

During the bilateral meeting with Canadian Foreign Minister Mélanie Joly, the two leaders exchanged views on international issues, including the Commonwealth, Ukraine conflict and the Indo-Pacific.

"An open & productive conversation with Canadian FM @melaniejoly. Agreed to work more closely to advance our important bilateral relationship. Exchanged views on international issues including the Commonwealth, Ukraine conflict & the Indo-Pacific. Look forward to being in touch," Jaishankar tweeted.

Earlier he held talks with his Rwandan counterpart Vincent Biruta during which they discussed the agenda of the Commonwealth summit beginning Friday and exchanged perspectives on regional developments.

"Began the day by meeting my host counterpart FM @Vbiruta of Rwanda. Reviewed our bilateral cooperation and follow up to PM @narendramodi's 2018 visit. Discussed the Commonwealth agenda and wished Rwanda a successful Summit. Exchanged perspectives on regional developments," Jaishankar tweeted.

The CHOGM had earlier been postponed twice due to COVID-19 pandemic. On Wednesday, Jaishankar met Kenya's Cabinet Secretary of Foriegn Affairs Raychelle Omamo and discussed the impact of the conflict in Ukraine and bilateral ties.

"So nice to meet my friend Raychelle Omamo of Kenya. Our discussions focused on the impact of the Ukraine conflict on food,fuel, and fertilizer security for the Global South," Jaishankar tweeted.

"Reaffirmed our ongoing cooperation in the UN Security Council," he wrote. Jaishankar also met his counterpart from Belize. "Glad to catch up with FM Eamon Courtenay of Belize on #CHOGM2022 sidelines in Rwanda," he tweeted.

"Welcomed the Center of Engineering constructed with Indian support. India will continue to provide vaccines in the global fight against the pandemic," Jaishankar tweeted.

The leaders of the Commonwealth member states are scheduled to deliberate on issues of contemporary relevance, including global challenges like climate change, food security, health issues, and likely to adopt a number of documents including the Kigali declaration on child care and protection reform, declaration on sustainable urbanisation and commonwealth living lands charter. PTI PMS AKJ PMS PMS