Jammu & Kashmir, Himachal Pradesh Reduce VAT On Petrol And Diesel; Here's How Much

Jammu and Kashmir, and Himachal Pradesh have now announced reduction of VAT on petrol and diesel. 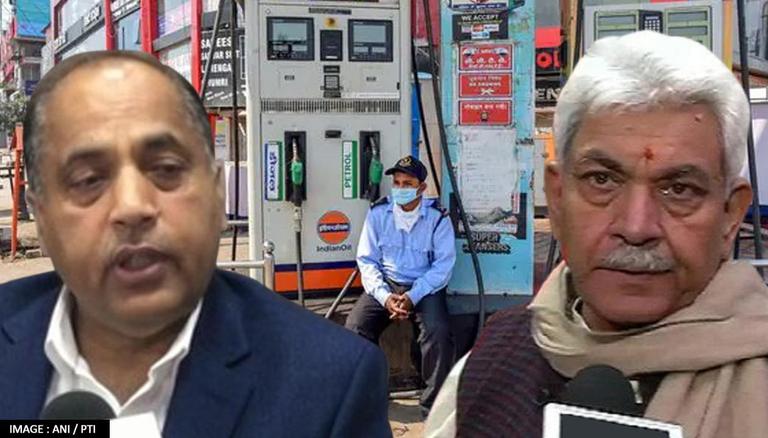 Hon'ble PM @narendramodi Ji has given a great Deepawali gift by announcing reduction in excise duty on Petrol&Diesel. In addition,J&K admin has decided to reduce additional Rs.7 on Petrol&Diesel,thereby reducing Petrol price by Rs.12/litre &Diesel by Rs.17/litre in UT from today.

Himachal Pradesh Chief Minister Jairam Thakur also took to Twitter and said, "On the lines of the Central government, our government has also decided to further reduce VAT on petrol and diesel. Now petrol will be cheaper by Rs 12 and diesel by Rs 17 per litre in the state. Certainly, this decision of the government will bring a lot of relief to the people of the state. Hearty thanks to the Prime Minister."

In what comes across as a slight relief to the citizens, the government decided to slash the prices of petrol and diesel by Rs 5 and Rs 10 respectively from Thursday, November 4. "On the eve of Diwali, Government of India announces excise duty reduction on petrol and diesel. Excise duty on Petrol and Diesel to be reduced by Rs 5 and Rs 10 respectively from tomorrow," the government statement said. As per government sources, the reduction in excise duty on diesel being double that of petrol is meant to be a boost to the farmers during the upcoming Rabi season. States have also been urged to reduce VAT on petrol and diesel to give relief to consumers.

After seven straight days of increase, fuel prices remained constant on Wednesday. The most recent hike, on November 2, pushed the price of petrol in Delhi to an all-time high of Rs 110.04 a litre. On November 3, the pricing remained unchanged. On the day, the price of diesel remained steady at Rs 98.42 per litre.

A government release said that in recent months, crude oil prices have witnessed a global upsurge. Consequently, domestic prices of petrol and diesel had increased in recent weeks, exerting inflationary pressure. The world has also seen shortages and increased prices of all forms of energy.

The release stated, "The Government of India has made efforts to ensure that there is no energy shortage in the country and that commodities such as petrol and diesel are available adequately to meet our requirements."