After stirring controversy by spitting on a woman's head to style her hair in a viral video, hairstylist Jawed Habib's franchise salon in Gwalior was ransacked. 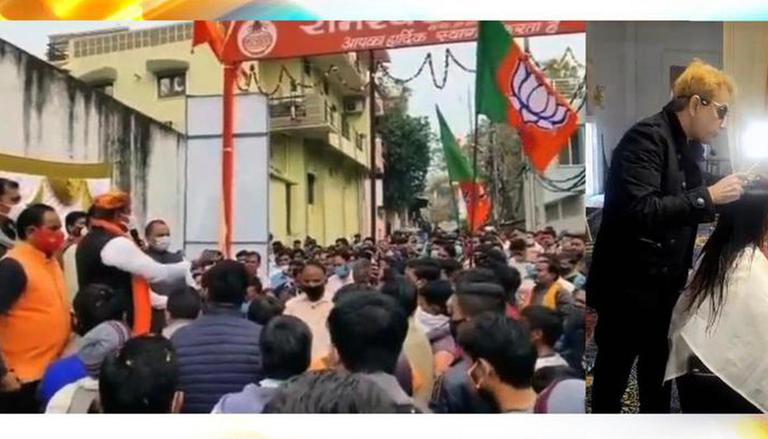 
After stirring controversy by spitting on a woman's head to style her hair in a viral video, celebrity hairstylist Jawed Habib's franchise salon in Gwalior was ransacked by members of Hindu Sena on Sunday. The salon, which is located in the Inderganj locality of the city has been warned by the group to stay closed or suffer a similar situation 'again and again'.

The owner of the salon, Mansi Udwani told the media that she had invested lakhs of rupees to establish the franchise. “How can I close my business? I have invested money in it. I am also a Hindu and most of my customers are Hindu,” she said

"What is happening? He is spitting on women who are coming for a haircut? The one whose culture promotes spitting, oh Hindus, stand up and spit on those who insult you. Remember, we must break such a conspiracy. Do not even step into such shops which spit in your hair," said Sharma.

Incidentally, Habib had joined the BJP in 2019 ahead of the Lok Sabha polls under BJP's celebrity outreach programme - 'Sampark se Samarthan'.

Shocked at the communal twist, Congress leader Narendra Saluja slammed the abusive language used by Sharma. Reminding Sharma that he was the protem speaker of MP, he asked, "When are you spitting on BJP leader Jawed Habib?". Many other Congress leaders have condemned Habib, pointing out his BJP connect.

On Thursday, a video on Twitter went viral, where Habib could be seen spitting on a woman's head while styling it, claiming that the woman's hair was too dry. The incident is said to be of a training seminar that took place in Uttar Pradesh's Muzaffarnagar. After facing backlash, the hairstylist has apologised for the act, saying he was trying to make the session 'hilarious'.

"The hair is dirty. Why are they dirty? Because shampoo has not been used," says Habib in the video. "Listen carefully... If there is less water..." Habib spits on the woman's head while parting her hair and goes, "this spit has life". The victim - Pooja Gupta filed a complaint against Habib at the Muzaffarnagar Police station. Moreover, National Commission for Women (NCW) chairman Rekha Sharma too summoned Habib on January 11 over the incident.

After facing backlash, Habib issued an apology saying, "Sorry...I mean it". He stated in the video, "Some sessions are too long, and we need to do such things to make sessions hilarious. Still, if somebody is hurt, please accept my apologies".