Teetering for over four months due to cash-drought, Jet Airways, flying for over 25 years, on Wednesday, April 17 said its last flight will takeoff later on Wednesday, after its lenders refused to offer a Rs 400-crore lifeline.

Teetering for over four months due to cash-drought, Jet Airways, flying for over 25 years, on Wednesday, April 17 said its last flight will takeoff later on Wednesday, after its lenders refused to offer a Rs 400-crore lifeline.

"With immediate effect, we are compelled to cancel all our international and domestic flights. The last flight will operate today," Jet Airways informed the exchanges. The airline said the decision follows the lenders refusing to offer a lifeline.

"Since no emergency funding from the lenders or any other source is forthcoming, the airline will not be able to pay for fuel or other critical services to keep the operations going... and has decided to go ahead with temporary suspension of operations," the airline said.

Accordingly, the last flight will leave the Amritsar airport at 2230 hrs for New Delhi as per its flight schedule.

Read the airlines' full statement below: 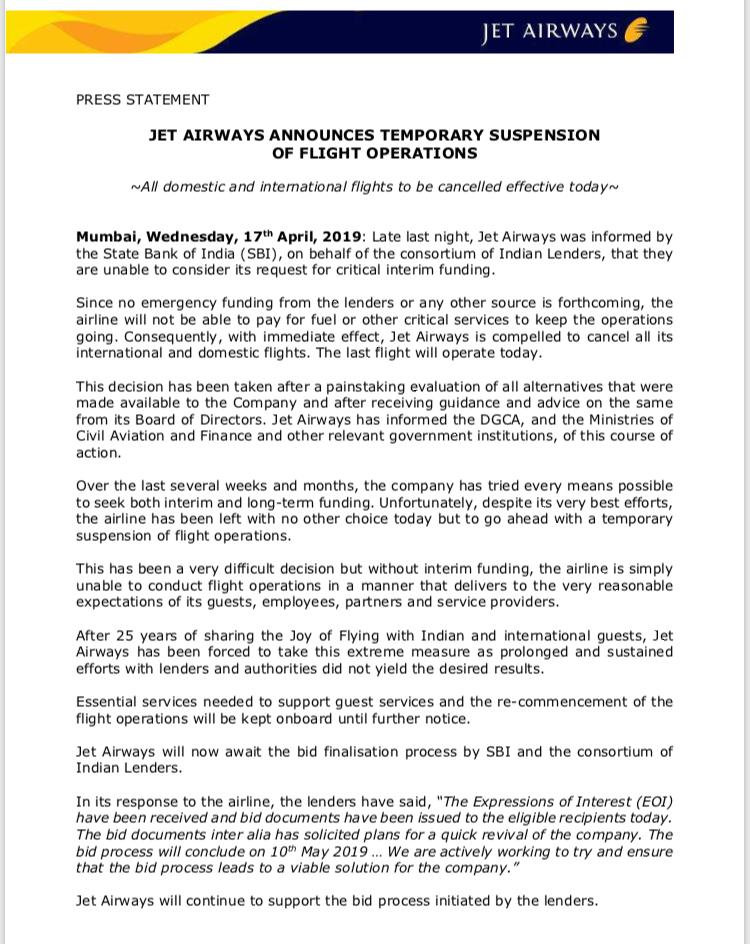 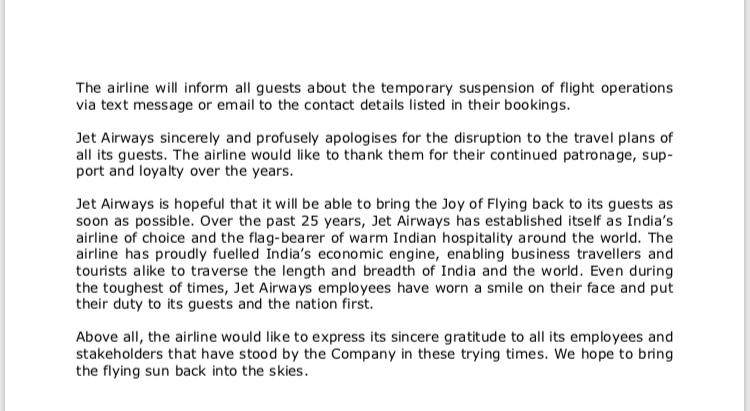 After a board meeting on Tuesday, April 16, the management had authorised chief executive Vinay Dube to make one last appeal to the lenders for an emergency Rs 400 crore funding, and if not the demand is not met, take a final call on the future of the airline on Wednesday.

READ: Desperate Vijay Mallya Latches Onto Jet Airways' Woes, Claims Discrimination For Not Being A PSU And Repeats Repayment Offer

Late last night, Jet Airways was informed by State Bank of India, on behalf of the consortium of lenders, that they were unable to consider its request for critical interim funding, the airline said in the statement.

On April 15, Jet Airways CEO Vinay Dube said the lenders could not decide on the emergency funding and that the airline's board would meet on Tuesday to take a call on the future. "The current status of our engagement with the lenders and other related matters shall be placed before the board tomorrow (Tuesday) morning, where the management will seek guidance from the board on the next steps forward. We will keep you updated on all critical developments," Dube said in an internal communication on April 15.