Ayodhya: Scindia Calls For People To Accept Verdict With Patience

Congress leader Jyotiraditya Scindia on Saturday reacted to the SC verdict on the Ayodhya land dispute, and asked for people to accept the verdict with patience

Congress leader Jyotiraditya Scindia on Saturday reacted to the Supreme Court verdict on the Ayodhya land dispute case. In his statement, the Madhya Pradesh Congress leader appealed to people to accept the decision with patience and seriousness and maintain harmony. Scindia took to Twitter and said that he respected the verdict of the top court and that everyone else should also accept the verdict with seriousness.

In another tweet released by the Congress leader, he called for everyone to come together and take the country forward with mutual trust.

Congress reacts to the SC verdict 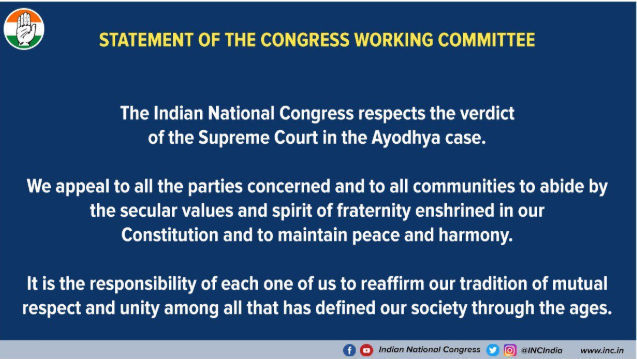 Pronouncing the landmark judgment in the Ayodhya dispute case, the Supreme Court on Saturday, delivered a unanimous judgment in the title suit of the disputed area awarding it to the Hindu parties for the construction of a temple. It also directed the Centre to come up with a scheme within three months to set up a trust which will hand over the outer courtyard and inner courtyard of the site for construction of a temple.

"Central government shall form in three to four months a scheme for setting up of a trust. They shall make necessary arrangements for the management of trust and construction of the temple," Chief Justice Ranjan Gogoi said while reading out the verdict. In its order, the Supreme Court also asked the Central or State government to provide an alternate land of 5 acres to the Muslims for the construction of a mosque.

READ |  Ayodhya Verdict: Disputed land to be given to Hindus, holds SC