After the meet, PM Narendra Modi shared a picture with Karnataka CM Basavaraj Bommai and assured full support for the development of Karnataka 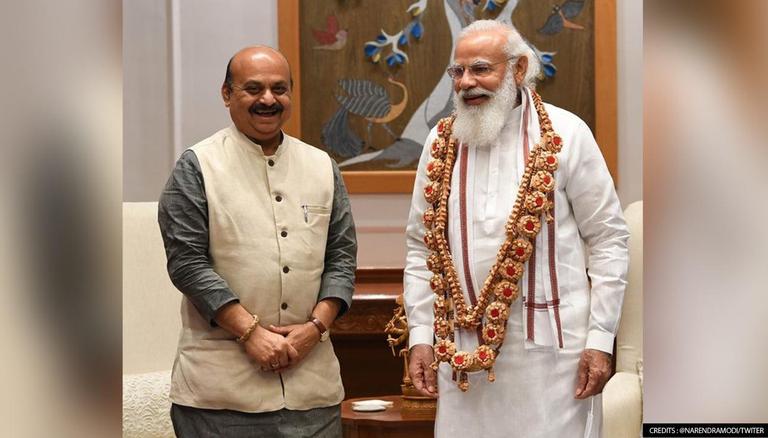 
Karnataka Chief Minister Basavaraj Bommai on Friday, July 30, met Prime Minister Narendra Modi at his residence in New Delhi and held discussions for nearly an hour. Notably, this was his first visit to the national capital after taking charge as the Chief Minister.

According to Karnataka CMO, PM Modi extended his full support to the development in the state. During the meet, CM Bommai also sought the Prime Minister to approve All India Institute Of Medical Science (AIIMS) for Hubballi-Dharwad and AIIMS like institutes for Raichur, which was identified as an aspirational district by NITI Aayog. He also appealed to PM to upgrade ESIC Medical College & Hospital in Kalaburagi to a regional AIIMS-like Institute.

"He also appealed to PM to upgrade ESIC Medical College & Hospital in Kalaburagi to regional AIIMS-like Institute," the CMO said.

Earlier in the day, Bommai called on Union Ministers Amit Shah, Rajnath Singh, Pralhad Joshi, and Gajendra Singh Shekhawat. He also hosted a lunch for members of Parliament (MPs) from the state.

On Tuesday, Basavaraj Bommai, a strong Veerashaiva-Lingayat leader, was elected as the new leader of the BJP legislature party after BS Yediyurappa's resignation. On Wednesday, he took charge as the Chief Minister of Karnataka. Bommai, who started his career with the 'Janata Parivaar' JD(U), joined Bharatiya Janata Party in 2008. He is a two-time MLC and three-time MLA from Shiggaon in the Haveri district.

Bommai had earlier said that he would discuss the cabinet expansion with the BJP High Command. Meanwhile, several senior Karnataka BJP leaders, as well as leaders of the saffron party from the Congress-JD(S) coalition in 2019, have expressed their interest to be part of the new cabinet.

On Wednesday, Bommai had said that BJP central observers G Kishan Reddy and Dharmendra Pradhan wanted to discuss the cabinet expansion after they go to the national capital. “I had met central observers Dharmendra Pradhan, Kishan Reddy and general secretary (Arun) Singh (in the morning), they said let's not discuss it today, once they go back to Delhi let's see,” he said.

Meanwhile, former CM BS Yediyurappa said that he will not interfere in the cabinet expansion and that Bommai had the freedom to induct whomever he wants. Yediyurappa's remarks come after reports suggested that several ministerial aspirants met him on Wednesday.