Parts of the Ramanagara district were severely flooded on Sunday, August 28. Indian Meteorological Department (IMD) has declared a yellow alert for 19 districts 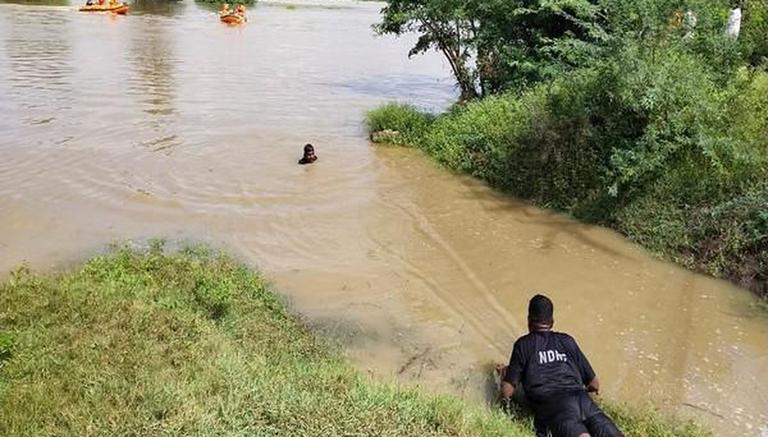 
Due to incessant rainfall across Karnataka, parts of the Ramanagara district were severely flooded on Sunday, August 28. Indian Meteorological Department (IMD) has declared a yellow alert for 19 districts in the state including Ramanagara and Bengaluru.

Reportedly, the Ramanagara district of Karnataka has witnessed 134 mm of rainfall in the past 24 hours, leading to inundation in many areas. As a precautionary measure, the district officials have announced a holiday for schools and colleges in Ramanagara and Channapatna districts. Heavy rains also flooded the Bengaluru-Mysuru highway as vehicles were seen stranded on the roads.

On Monday morning, a private bus moving from Bengaluru to Kollegala got stuck on a flooded underpass on the Bengaluru-Mysuru highway. Nearly 50 passengers were rescued by locals, who used tractors to pull the bus out of the water. However, the bus broke down and could not proceed further, leaving the passengers stranded.

According to sources, after learning the plight of the passengers, Karnataka State Road Transport Corporation (KSRTC) diverted Bengaluru-Mysuru buses via Harohalli-Kanakapura-Malavalli-Mysore.

CM Basavaraj Bommai said, “A survey must be undertaken immediately and take repair works wherever necessary.” Bommai also directed the DCs’ and SPs’ of Ramanagara to allow vehicles to alternate routes from today itself because of waterlogging on Mysore-Bengaluru National Highway due to heavy rains.

Indian Meteorological Department (IMD) on Monday issued a yellow alert for 19 districts in Karnataka. IMD said that heavy rain will lash districts of Dakshina Kannada, Uttara Kannada, Udupi, Shivamogga, Chikkamagalur, Kodagu, Hassan, and Kolar. The fishermen in the coastal districts have been advised not to venture into the sea as winds are likely to blow at a speed of 40 to 50 kilometers per hour.

Notably, 33 percent of the talukas in Karnataka received moderate rainfall in the last 24 hours including most of Mandya, Ramanagara, Bengaluru Rural, Bengaluru Urban, Tumkur, and Chikkaballapur districts in south Karnataka.