The Kerala Police on Monday launched a new project called ‘Pink Protection’ aimed at the protection and safety of women in public, private and digital places 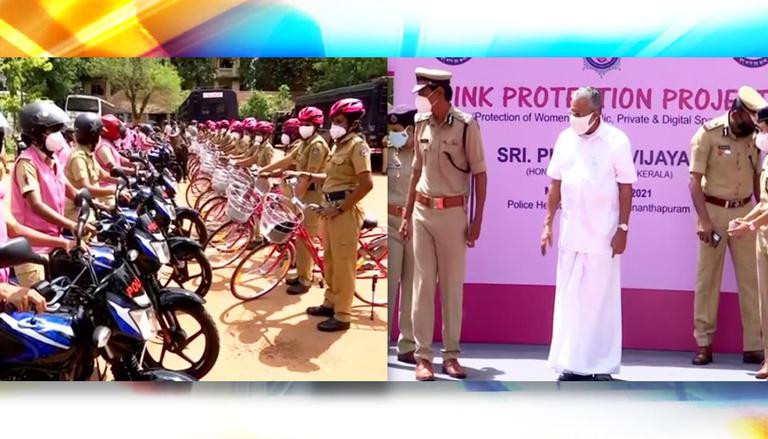 
The Kerala Police on Monday launched a new project called ‘Pink Protection’ aimed at the protection and safety of women in public, private and digital places. The project will focus on dowry-related issues, cyberbullying, and humiliation in public places.

On Monday, Kerala CM Pinarayi Vijayan flagged off 10 cars, 40 two-wheelers including bullet bikes, and 20 bicycles as a part of the 'Pink Protection' project. The 'Pink Protection' project has a total number of 10 components, of which, one is already activated at the existing Pink Police Patrol System. DGP Anik Kant and other senior police officials were also present at the function at Kerala Police Headquarters.

Anju, a civil police officer said, "There are a lot of people who have problems which can not be revealed to anyone. This project aims to reach such people and listen to their problems, give them awareness and basic legal help to ensure women safety."

How Kerala Police will work under the project?

Under this project, the police officials will visit the houses in the state at regular intervals to collect information about domestic violence. They will collect the information from panchayat members, neighbours, and other local people, and then, hand it over to the Station House Officers for further action. The system has been named 'Pink Janamaithri Beat'.

Under the Pink Women Beat, the trained women police officers have been recruited to ensure women's safety. The officials will be present in the govt-owned KSRTC as well as private buses, in front of schools & colleges, and in other public places like bus stops. The pink control room has been set up in all 14 districts to coordinate the activities.

A Pink Shadow Patrol Team has also been deployed in order to detect anti-socials in crowded areas. As a part of the project, a bullet patrol team has also been launched called 'Pink Romeo'. Anju, the civil police officer elaborated on the project and said, "This is another version of Janamaithri beat. We will go to each area and establish a friendly relationship with people to make them feel free to share their issues if they have. We will plan to conduct regular patrolling and we will get trying for that."