According to the Sreebhumi club chief, the unique pandal designed as the Burj Khalifa is 145 feet tall and took 250 workers and two months to build. 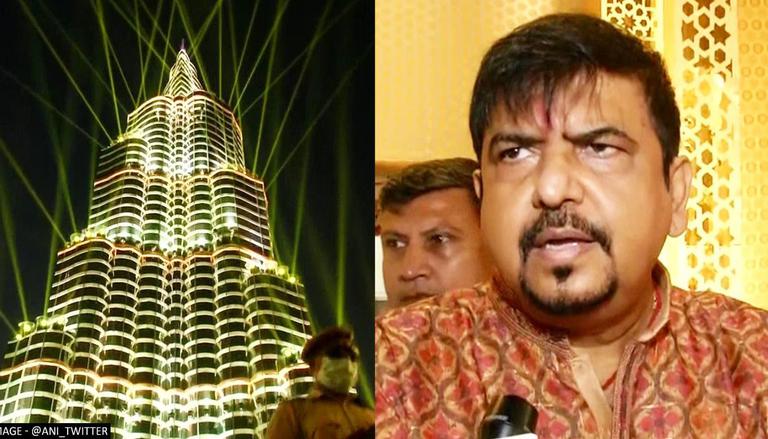 
Amidst the Durga Puja festivities, the laser show set up at east Kolkata’s Sreebhumi Durga Puja pandal, which resembled Dubai's famous Burj Khalifa skyscraper, was called off on Monday evening. The grand laser set up, which saw devotees gather in large numbers, was switched off after the pilots of three planes complained to the air traffic control (ATC) tower about the same. The pilots claimed that the lights were dangerous as they found it difficult to land the aircraft.

Kolkata's Sreebhumi Durga Puja Pandal was designed inspired by the theme of Dubai’s Burj Khalifa. The building was witnessing huge crowds until the organisers had to call off its attractive laser show after they received complaints from the nearby ATC tower. The heavy lights show was causing trouble for aircraft pilots as it was located near the airport. However, the organisers claimed that they didn’t receive any such complaints.

Kolkata, WB | We haven't received any complaint. Lights have been reduced in the pandal as there's a huge footfall of people here: State Min & Sree Bhumi Sporting Club chief, Sujit Bose on being asked about a complaint allegedly against pandal lights hindering flight movement pic.twitter.com/rcJQHi1o3G

Sreebhumi Sporting Club President Sujit Bose said that they received no complaints regarding the laser show and had decided to switch it off in view of the pandemic restrictions. “We haven't received any complaint. Lights have been reduced in the pandal as there's a huge footfall of people here.” According to Bose, the unique pandal designed as the Burj Khalifa is 145 feet tall and took 250 workers and two months to build.

Though the height of the tower meets the limit prescribed by the Airports Authority of India, it had to be called off as the strong beams of the laser caused visibility problems for pilots trying to land on the nearby airstrip. The Puja here was inaugurated by West Bengal chief minister Mamata Banerjee on October 9. During the inauguration ceremony, Sreebhumi club chief Bose had claimed that a team had visited Dubai before making the replica as part of the Navratri celebrations.

Bose, in a statement, had said, "Every year, we built the pandal in form of a replica of iconic buildings. Earlier, we built it on the theme of Paris Opera, Kedarnath & Puri temples among others." Around 250 workers constructed the awe-inspiring pandal over the period of two months. Bose, also a Fire and Emergency Services Minister in West Bengal government, added that the club conducts charity and social work, which ramps up during the Durga Puja each year.  Bose further stated that the 145 feet tall Burj Khalifa resembling pandal is abound with special lighting arrangements that give the structure a glowing, majestic look at night.

READ | From 'Sholay' to Burj Khalifa, a look at themed Durga Puja Pandals that grabbed eyeballs