Kulbhushan Jadhav Case To Be Heard By ICJ Starting From February 18, 2019

The International Court of Justice (ICJ) will begin the hearing on Indian national Kulbhushan Jadhav, who is facing a death penalty in Pakistan, on February 18, 2019 in an oral argument which will continue for four days

The International Court of Justice (ICJ) will begin the hearing on Indian national Kulbhushan Jadhav, who is facing a death penalty in Pakistan, on February 18, 2019 in an oral argument which will continue for four days.

After the two sides are heard, the ICJ will then begin the second round of arguments, which will see India again going first on February 20, followed by Pakistan on February 21. Unlike the first round, the two nations will be given only 1.5 hours to speak. 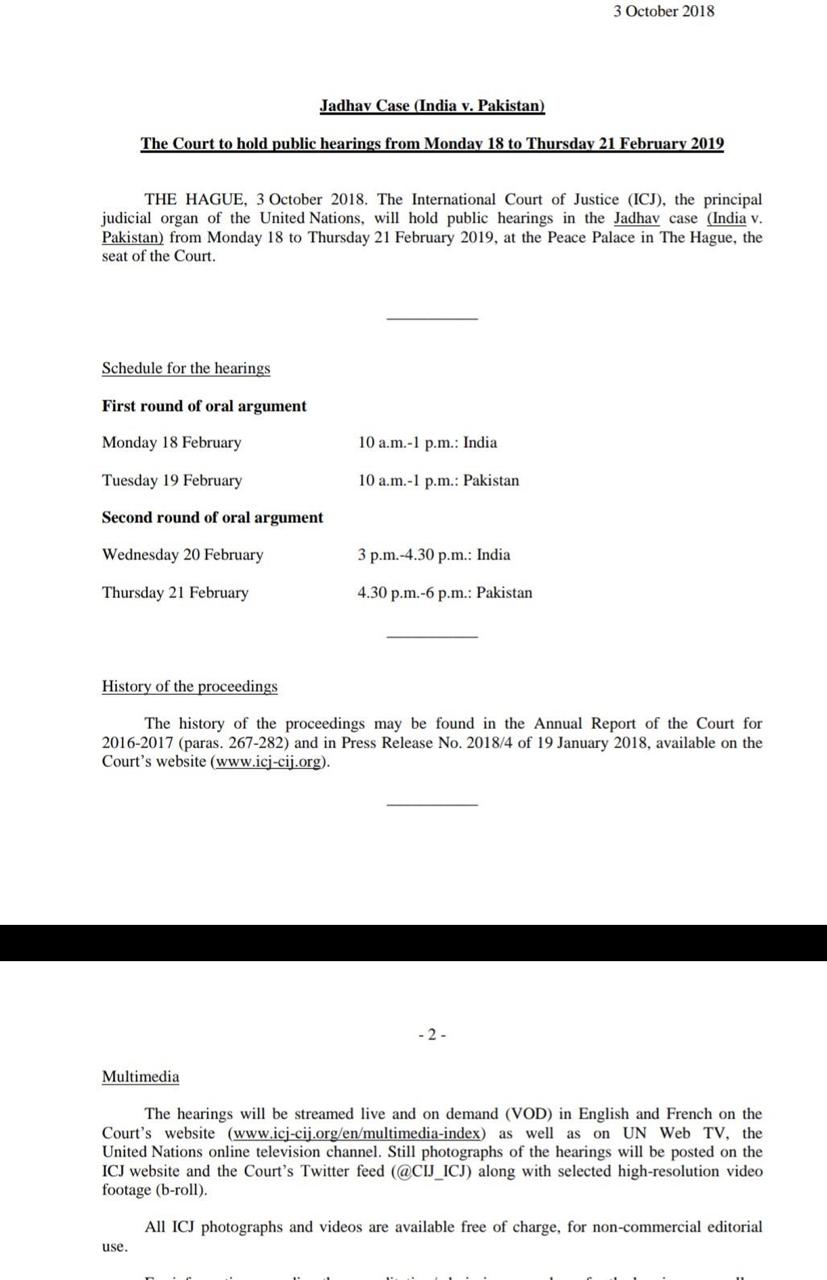 The press release of ICJ on this matter read, "The hearings will be streamed live and on demand (VOD) in English and French on the Court's website as well as on UN Web TV, the United Nations online television channel."

Kulbhushan Jadhav, a former Indian Navy officer, was arrested by Pakistani officials on March 3, 2016, on suspicion of espionage and sabotage activities against the country. Claiming that Jadhav was an Indian spy, the Pakistani military court sentenced him to death in April 2017. The Indian side, however, maintains that Jadhav was kidnapped from Iran where he had business interests after retiring from the Navy and that he has no links with the government. The execution was stayed after India’s initial appeal at International Court of Justice.

Earlier, Republic TV had learnt that Pakistan had submit its second counter-memorial to India over the conviction of Indian national Kulbhushan at ICJ. Foreign Office Director India Dr Fareha Bugti, of the Pakistan Ministry of Foreign Affairs, submitted the reply on Pakistan's behalf, Pakistani diplomatic.

As per sources, Pakistan had compiled a comprehensive and detailed reply over the concerns raised by India on the espionage and terrorism conviction and death penalty sentence meted out to Jadhav by Field General Court Martial (FGCM) in April 2017. The response ran into 400 pages and, as per sources, had been compiled by a team of experts led by the Attorney-General of Pakistan.

PEOPLE HAVE PLEDGED SO FAR
In next 10 days, 5,000 more Shaheen Baghs across country: Azad
Chemist and druggist association calls for a three-day strike
Interpol issues Blue Corner notice against Nithyananda: Here's what it means
FM not being invited for pre-Budget meets by PMO: Chavan
Finance Ministry to showcase achievements of financial inclusion drive on January 26
DO NOT MISS
BJP: 'WE ARE USED TO LAL MIRCHI'
CONG RELEASES LIST OF CAMPAIGNERS
BJP'S QUESTION ON UDDHAV AYODYHA
KEJRIWAL LAUDS MP GOVT'S SYSTEM
SHIV SENA REFUTES CONGRESS
LIFE INSURANCE FOR NRI IN INDIA