Three days after the change of government in Jharkhand, RJD President Lalu Prasad flouted rules and regulations of the jail manual and held a ‘darbar’ (meeting) in the prison ward of Rajendra Institute Medical Sciences (RIMS), Ranchi. The RJD chief who is convicted in the fodder scam is admitted to the paying ward room no. 11 of the RIMS. On Thursday afternoon, after meeting Chief Minister elect Hemant Soren around 2.30 PM, the RJD chief sat outside his paying ward and met as many as 12 to 15 people on Thursday.

According to the jail manual, only three visitors can meet Lalu Prasad every Saturday under special circumstances with the permission of jail authorities. His family members or lawyer can meet any day.

A photograph of the RJD chief has gone viral in which he can be seen sitting on a chair and talking to former Agriculture Minister of Bihar Narendra Singh and 4 to 5 people in the verandah of the hospital. This went on until 4 pm. When he realized that his pictures are being clicked, he asked Narendra Singh to leave the place and went inside his room. A video of Narendra Singh was also shot, in which Singh is talking to someone on phone and telling him that he is coming upstairs. 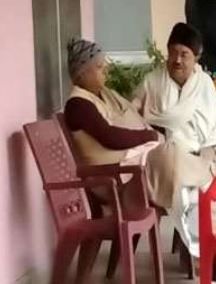 None of the senior police officials are speaking on this breach of security, but when confronted, the security personnel deployed at the entrance of RIMS hospital for Lalu’s security said, "I am not aware who all met him. I am only aware of Hemant Soren’s meeting. I don’t know how Narendra Singh met Lalu".

RJD leader from Bihar, Janardan Prasad Azad who also met Lalu Prasad on Thursday said, "Lalu ji is very happy. I had come here to enquire about his health. His health is fine. I have come from Bihar to meet him".

Criticizing the RJD chief for holding a darbar in jail, BJP spokesperson Pradip Sinha said, "Court should review Lalu  Prasad's  health condition and he should be shifted to jail. He has been admitted to the hospital on health grounds. No one should be allowed to break rules."

Congress spokesperson Rajesh Gupta defending Lalu Prasad's meeting in the prison ward of the hospital said, "There is no harm in people meeting Lalu ji as he is the head of the party and the government formation in Jharkhand is underway. Earlier, the BJP government was very harsh on Lalu ji but now the rules have become lenient. Still, he has been convicted and is serving jail sentence".

This is not the first time that the RJD chief has breached the rules and regulations of the jail manual. Earlier, during his previous detention in 2013-2014 when Hemant Soren was the chief minister, Jharkhand ministers visited the jail almost every day and served him homemade food.

The scenario changed when Lalu again went to jail in December 2017 and Raghubar Das-led BJP government enforced strict regulations and even Lalu’s family members were not allowed to visit the jail except on Saturday. Lalu’s son Tejashwi was also denied meeting beyond 5 pm on Saturday.