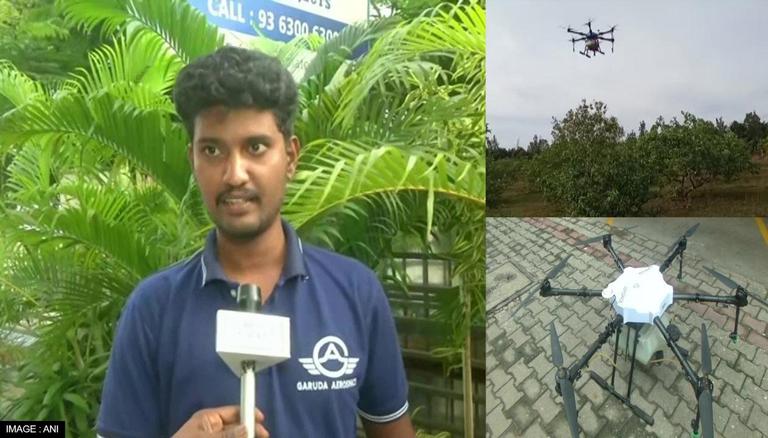 
Garuda Aerospace, a firm that is part of Prime Minister Narendra Modi's 'Make in India' drive, is producing 1,000 drones for the agriculture sector. Drones will aid farmers in maximising farm output and profit. The firm aims to assist farmers in moving away from manual pesticide, water, and fertiliser spraying on crops in order to save time, water, and resources while also boosting the agriculture industry.

"Our founder met with Prime Minister Narendra Modi, presented him with our plan to manufacture 1,000 drones next month. He (PM) agreed to launch the event... With the help of drones, we'll be able to save time, water, resources and get past manual spraying," Ram Kumar, Vice President Garuda Aerospace, told ANI.

"Spraying through drones has many advantages first is spraying manually takes three to four hours to cover an acre but by using a drone, it's just like 10 minutes. It reduces the water, pesticides used per acre," Ram Kumar added. Drones will help to protect crops from pests in a timely manner, save time for crop scouting, lower total farm production costs, and ensure high yield and quality crops.

Prime Minister Narendra Modi praised India's new liberalised drone policy, which went into effect this year, during the 82nd edition of his monthly radio address 'Mann Ki Baat,' stating that the liberalised policies aided in the use of drones in India's fight against COVID-19 by enabling vaccine supply. The Prime Minister also urged the country's youth to make the most of the new drone policy put in place by the government. Previously, security clearance was required to operate an Unmanned Aircraft System (UAS), or drone. The Centre has removed these restrictions, allowing for a more liberalised environment for civilian drones, signalling a significant shift in policy.

The government made it possible for academia, startups, end-users, and other stakeholders to use it more widely. To make it easier for drones to be used in industries like agriculture, mining, infrastructure, surveillance, emergency response, transportation, geospatial mapping, defence, and law enforcement, the Ministry of Civil Aviation (MoCA) decided to repeal the UAS Rules 2021 and replace them with the liberalised Drone Rules, 2021.