It appears that controversial Islamic preacher Zakir Naik is facing major trouble in Malaysia where he has been given Permanent Residency.

It appears that controversial Islamic preacher Zakir Naik is facing major trouble in Malaysia where he has been given Permanent Residency. Following some racially insensitive speeches in the multi-ethnic nation, five ministers in the government had demanded his deportation from Malaysia

Now, Human Resources Minister M Kula Segaran on Saturday dared Naik to go ahead and file a defamation lawsuit, adding that he will challenge him in court. Kula Segaran, is currently in Japan on a working visit. He has also said that he stands by his comments that Naik wanted to sow discord in Malaysia through his racially-tinged remarks. “Zakir Naik needs to know that there is no necessity to wait for a reply from me. He should advise his lawyers to file proceedings, if he is serious, as I am steadfast in fighting this matter, come what may." Taunting Naik, he added, “Rest assured that I will not cower and run to another country to seek refuge.  As soon as work is over, I will return to my motherland and defend the unfounded allegations against me without fear.”

Read his statement below: 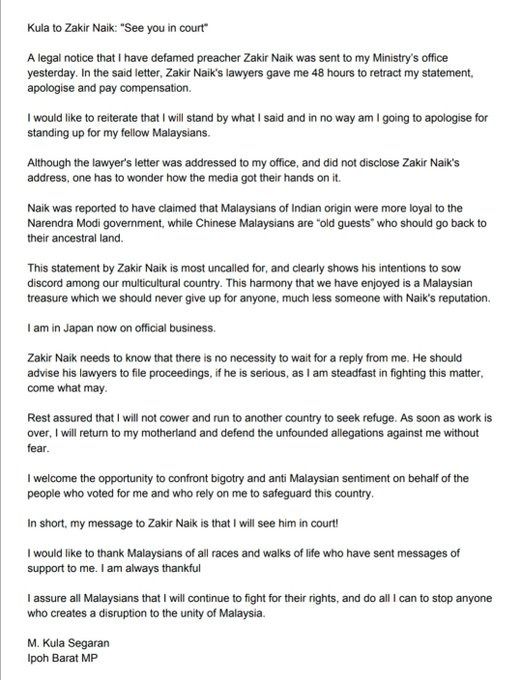 Kula Segaran is among the ministers who spoke against Naik. Five ministers including Malaysia's Home Minister had demanded Naik's deportation from the country and revocation of his Permanent Residency. Earlier on Saturday, an MP from People's Justice Party said that he wants the preacher out of the country and said he would appeal to the Prime Minister Mahathir Mohamad regarding the same. The ministers who want Naik expelled from Malaysia following the outrage after his statement against ethnic groups are Syed Saddiq Abdul Rahman, Gobind Singh, M Kula Segaran, Xavier Jayakumar, Muhyiddin Yassin (Home Minister).

On Friday in a major diplomatic win for India, an investigation was launched against Naik by Malaysian authorities over his intent to breach the peace in the country and allegedly making sensitive remarks on the Hindus and Chinese residing in Malaysia. Addressing a press conference in Kuala Lumpur, Federal CID director Huzir Mohamed of the Selangor police said that as many as 115 reports have been launched on the matter.  The Malaysian Prime Minister has also stated that the country will revoke the Permanent Resident (PR) status of Zakir Naik if investigations show that his actions are against the well-being of the country.