After 4 men were detained outside Alok Verma's residence, the MHA has denied any snooping angle. MHA sources have said that to snoop on individuals and too on a senior person as Verma, there are far better techniques.

Update at 12.54 pm: It's really unfortunate that an officer of stature of CBI Director is being snooped. Why are the IB officers not going to Asthana's residence?: Majeed Memon, NCP

After 4 men were detained outside Alok Verma's residence, the MHA has denied any snooping angle. MHA sources have said that to snoop on individuals and that too on a senior person as Verma, there are far better techniques. The MHA has termed it a regular patrol, saying several important individuals reside on the same road, including the NSA and former PM Manmohan Singh.

Earlier in the day, four men in plain clothes were detained outside ousted CBI Boss Alok Verma’s residence. In the visuals accessed, the men can be seen running after being confronted by the cops. The detained men have claimed to be the part of the Intelligence Bureau.

#WATCH: Earlier visuals of two of the four people (who were seen outside the residence of #AlokVerma) being taken for questioning. #CBI #Delhi pic.twitter.com/2KnqNfrnH0

Furthermore, Prashant Bhushan has moved Supreme Court seeking quashing of the recent decisions by the centre on the recommendation of the CVC, resulting in the massive CBI overhaul. Bhushan's NGO Common Cause has filed a petition in the top court regarding the two mentioned decisions, as well as also seeking removal of Rakesh Asthana from CBI and an SIT probe into the cases of corruption against the officers of the agency.

The Congress party, meanwhile, has attacked the government over the snooping allegations, saying, “As if the illegal removal of Alok Verma from his post as CBI chief wasn't enough, now the govt. has set IB operatives to spy on him. Not the first time for, #StalkerModi” 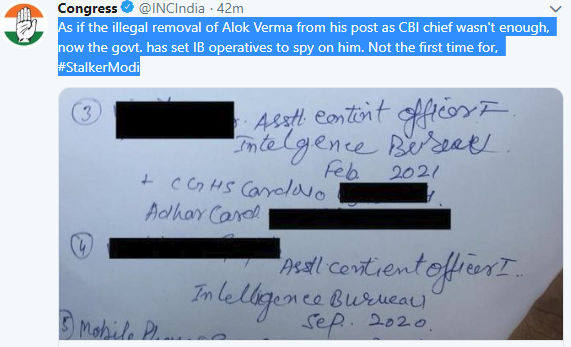 Amid row between the number 1 and number 2 at CBI, the Centre on the recommendation of CVC appointed Joint Director M Nageshwar Rao as the interim CBI director in an unprecedented move. Nageshwar Rao took charge as the CBI Interim Director around 2 am this morning, as per the sources.