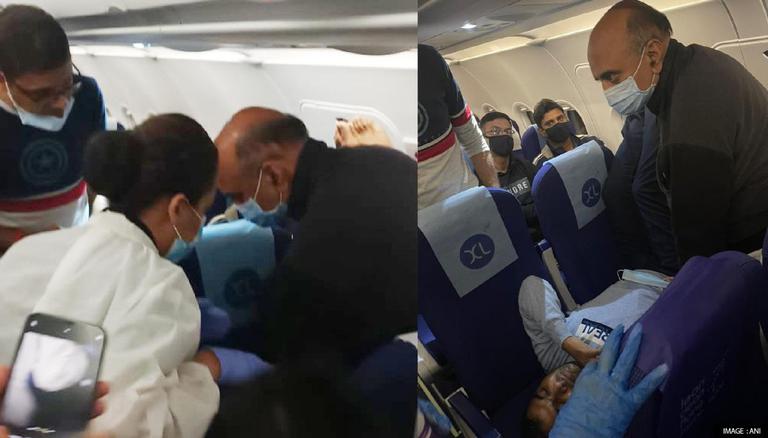 
Bhagwat Karad, a doctor-turned-Union minister, received accolades from Prime Minister Narendra Modi today for his prompt assistance to a fellow traveller on IndiGo flight on November 12. Bhagwat Karad, who is a Minister of State for Finance, was on an IndiGo flight from Delhi to Mumbai Friday night when another passenger complained of dizziness. The minister stepped in to assist the traveller. Dr Karad is a surgeon and a Rajya Sabha member from Maharashtra. He also runs an Aurangabad hospital and has had various medical roles. He was the mayor of Aurangabad before being elected to the Upper House.

Images provided by news agency ANI shows that the patient was sprawled out across a row of seats, with the minister watching over him. The caption of the post read, "Union Minister Dr Bhagwat Karad gave primary medical aid to a co-passenger on-board Delhi-Mumbai flight last night." The caption also mentioned Dr Karad's statement. He told ANI, "Patient was sweating profusely & had low BP. I removed his clothes, raised his legs, rubbed his chest & gave glucose. He felt better after 30 minutes."

The post garnered Prime Minister Modi's attention after it started trending. PM Modi took to Twitter and applauded the Union minister. He retweeted the IndiGo airline's post and wrote, "A doctor at heart, always! Great gesture by my colleague @DrBhagwatKarad."

A doctor at heart, always!

Furthermore, the airline also expressed gratitude for the Union minister's prompt act, tweeting, "Our heartfelt gratitude and sincere appreciation towards MoS for ministering to his duties non-stop! @DrBhagwatKarad your voluntary support for helping out a fellow passenger is ever so inspiring."

Our heartfelt gratitude and sincere appreciation towards MoS for ministering to his duties non-stop! @DrBhagwatKarad your voluntary support for helping out a fellow passenger is ever so inspiring. https://t.co/I0tWjNqJXi

Union Minister Bhagwat Karad was on Indigo aircraft 6E 171 from Delhi to Mumbai. A passenger's condition deteriorated an hour after the aircraft took off. The flight attendants immediately inquired if there was a doctor on board. Karad then stepped forward to assist. The Union Minister administered first aid to the patient and administered shots from the flight's emergency kit to the passenger. According to a statement from the Minister of State for Finance, the passenger complained of giddiness mid-flight owing to a blood pressure problem. Photos of minister Karad, assisting a co-passenger has gone viral on social media.