Mohammed Shami's arrest warrant was stayed for two months by the Alipore court. He is accused of domestic violence and sexual harassment by his wife Hasin Jahan

The Alipore court on Monday ordered a stay of nearly two months on the arrest warrant against Indian cricketer Mohammed Shami. Shami was accused of domestic violence and sexual harassment by his wife Hasin Jahan in March. The charge sheet against the Indian fast bowler was submitted by the Kolkata Police before the court of Alipore. Also, last week Shami was ordered to appear before the Alipore court in 15 days or he would have to face arrest.

According to the legal document accessed by Republic TV, the order was stayed by district judge Rai Chattopadhyay in Alipore Court. The case is listed for a further hearing on November 2. Shami has been in a legal battle with his wife Hasin Jahan, a former model, since March 2018. She has publicly accused Shami of having numerous affairs and being involved in corruption. Shami has dismissed all the accusations as a campaign to defame him and credited himself for the comeback.

" Because I had to endure all that I was made to go through. What I went through in the past 18 months, it's me and only me who had to suffer. So credit goes to me," Shami said without divulging more details. "Yes, I thank the Almighty for giving me the strength to fight everything from family issues to fitness. I am now only focussed on doing well for my country," said the pacer. 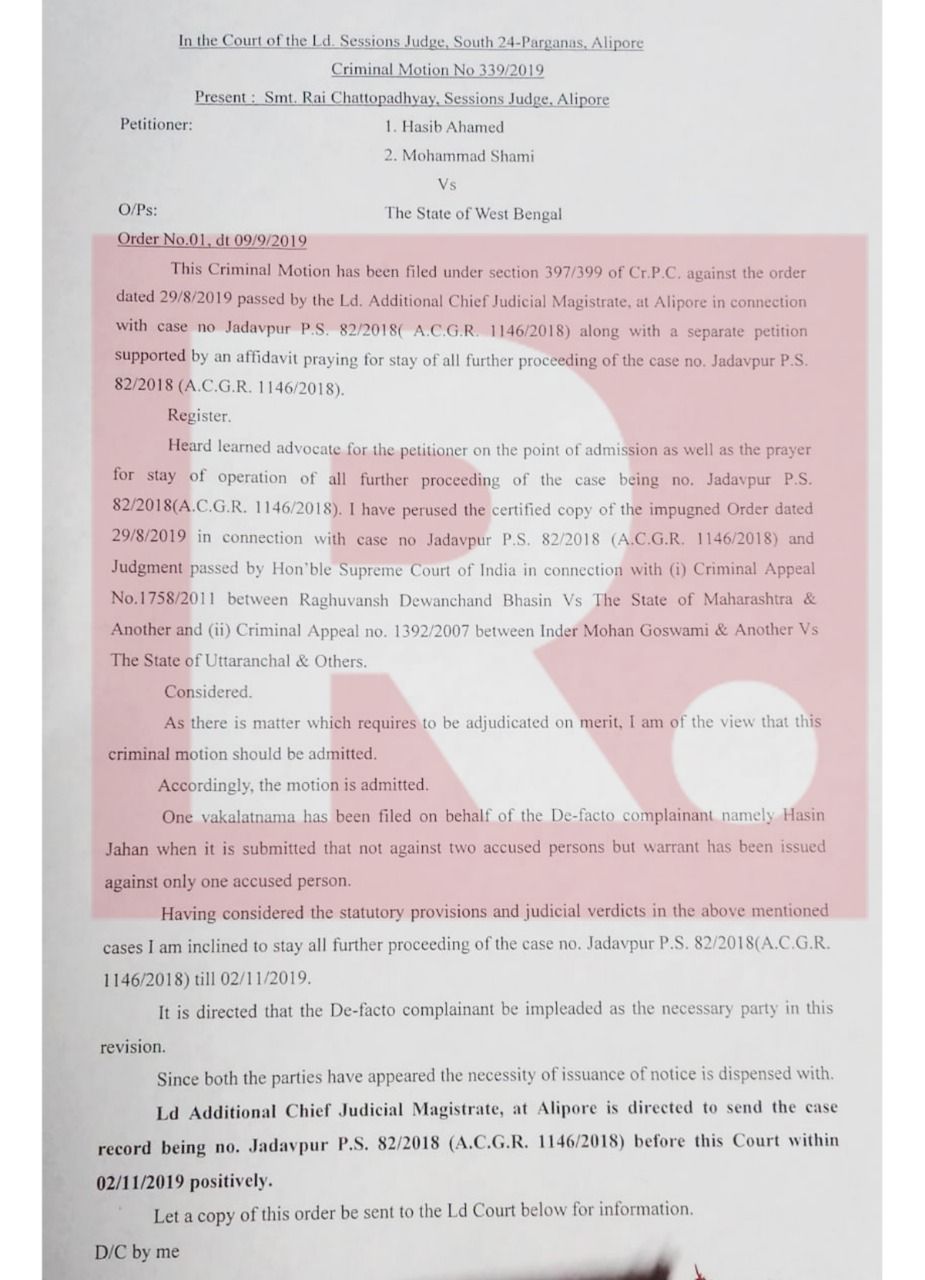 An arrest warrant was issued against Indian pacer Mohammed Shami for domestic violence by the Alipore Court on September 3. The Indian pacer was given 15 days to surrender as he was currently a part of the Indian team touring West Indies. Shami had an outstanding tournament in the 2019 showpiece event where he became the second pacer after Chetan Sharma to take a hat-trick in World Cup. Earlier, prior to the team's departure to the US, Mohammed Shami's visa was rejected due to his existing police record on charges of domestic violence and adultery, before the BCCI stepped into his rescue. The Bengal speedster finally got the clearance after BCCI CEO Rahul Johri wrote a letter to the US Embassy, stating his achievements for the country and furnishing the full police report about his marital discord with estranged wife Hasin Jahan.

Mohammed Shami was charged under Section 498A (dowry harassment) and 354A (sexual harassment) of Indian Penal Code (IPC) by the Kolkata Police, which submitted the charge sheet against Indian fast bowler before the court of Alipore police. Following the complaint, Mohammed Shami was kept out of the Indian side until he marked his return during the World Cup. The bowler claimed that he had moved on from the incident and that he had made a successful comeback on-field. Meanwhile, Hasin Jahan had filed a petition with the Alipore court accusing him of domestic violence and demanded Rs 7 lakh per month in alimony, to maintain the family. The court accepted her plea and a sum of Rs 80,000 was allocated for her daughter.