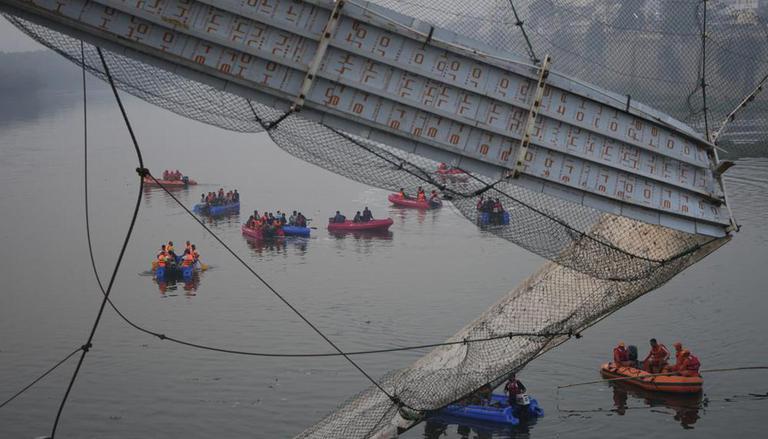 
Shivam, aged 10 years, was enjoying the thrill of the "Jhulta pool" or suspension bridge, a famous tourist spot in Morbi, with his family members as he wanted to enjoy Diwali vacations, but hours later he returned to Rajkot with bodies of his parents and brother- all victims of the bridge collapse incident in which 134 people lost their lives.

Shivam survived as he caught hold of a snapped cable but his parents and elder brother were not so lucky.

For Amina Banu also the visit to the bridge turned into a nightmare that she will perhaps not be able to forget in her life. She had gone to the bridge with 36 people from her extended family, six of whom died in the tragedy.

Many survivors have lost more than one member of their families in the tragedy.

“I went to the bridge with 36 people from my family along with my children. Six members of my family including my cousin and her children died in the incident,” Banu said.

Recalling the horrific incident, Banu said nobody came for help initially and they were on their own.

“They charged a ticket of Rs 17 per person. Why did the company allow so many people on the bridge? The company said they had spent Rs 2 crore on renovating the bridge. Is the life of people worth Rs 17?" she asked.

A resident of Rajkot, Shivam was visiting his maternal grandparents in Morbi. He, his parents, and his elder brother were on the bridge which was crammed with people when the tragedy struck on Sunday evening.

READ | On tape: Morbi bridge inaugurated 5 days before collapse by Oreva boss, so why no action?

"There was a huge crowd when the bridge suddenly collapsed. I survived because I caught hold of a hanging cable and slowly climbed up. But my brother, father and mother are still missing," he told reporters.

Later, his relatives from Rajkot rushed to Morbi and found the bodies of Shivam's missing family members among those who were fished out of the river.

The bodies were taken to Rajkot with the young child accompanying them.

In a video that has gone viral on social media, some youngsters were seen kicking and shaking cables of the bridge apparently to scare other tourists, minutes before the collapse.

One of the survivors Mehul Raval said there were at least 300 people on the bridge when its cables snapped and it collapsed into the river.

"The bridge suddenly caved in when we were on it. All the people fell into the river. The bridge collapsed mainly because it was overcrowded," Raval told reporters at the Morbi civil hospital, Mohan Kundariya told PTI that he lost 12 relatives in the tragedy. “They had come to the picnic spot on Sunday but they perished in the tragedy,” he said.

A Morbi resident also said there were at least 300 people on the bridge at the time of the incident.

Ironically, the bridge was reopened for the public a few days back after renovation, he said.

"Majority of the victims were children who were enjoying Diwali vacation. Locals rushed to the spot immediately after the incident and pulled out many people from the river alive," he said.

Another resident said the incident opened the wounds of the Machchhu dam tragedy of 1979 when thousands of residents died in floods.

"All the residents living nearby the river came for rescue and saved many lives. This is the first major incident in Morbi after the 1979 dam breach. This bridge collapsed due to overcrowding. The rescue was hampered because of low light in the evening," he said.

"I pulled out many people alive, but many others were already dead when they were pulled out. Everyone is doing their bit to help people," he said.

The nature and scope of the tragedy has shaken the nation.

The Morbi district website described the suspension bridge as an engineering marvel built at the turn of the century, which reflects the progressive and scientific nature of the rulers of Morbi.

This was built to give a unique identity to Morbi using the latest technology available in those days, in Europe. The bridge was 1.25 metre wide and spans 233 metre on the Machchhu river connecting Darbargadh Palace and Lakhdhirji Engineering College, it says.