A mother rhino in Kaziranga was spotted protecting her calf after sensing some danger. The video has been shared by Kaziranga National Park on Twitter. 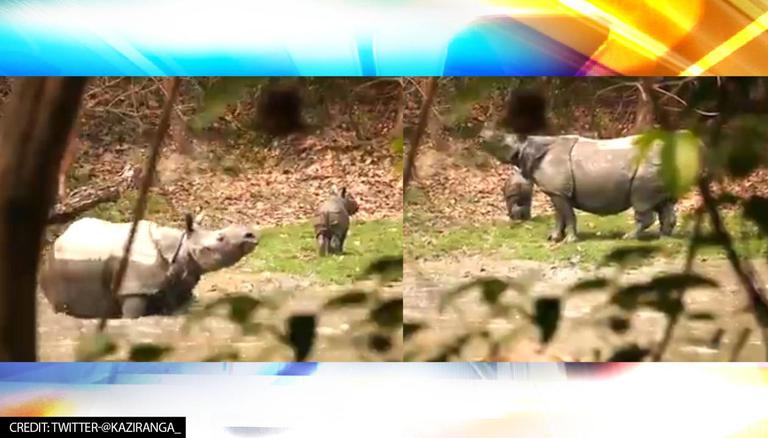 
There is nothing more precious than the bond between a mother and her child. A video of a mother rhino and her calf has surfaced on the internet that proves the above statement. In the video shared on Twitter, a mother rhino after sensing some threat stands next to her calf in order to protect it from danger. The clip posted by Kaziranga National Park and Tiger Reserve on Twitter has caught the attention of netizens.

Since being shared on September 16, the video garnered over 29,000 views and several reactions. Netizens were amazed to witness the alertness of a rhino mother to save her baby from danger. One user commented, "Mom is mom". Another netizen commented, "So cute". Another user commented, "Mother will be always a mother". Check out some user reactions:

Mother will be always a mother.💚🙌

Last month, a video of a mother lion and her cub being all playful had surfaced on the internet. The clip was shared by IFS officer Surender Mehra on Twitter and commemorates World Lion Day. In the video, a mama lion is shown sitting in a large open space as her baby plays around. She gets up as the curious cub ventures a bit too far away from her reach, in order to stop it from going any further. The moment you watch the clip you won't be able to help but fall in love with it. Watch the video here:

It’s not just the number of a particular wild species that is important..!

More important is how we keep this population healthy and secure their natural habitat at landscape level..#WorldLionDay 🦁@GujForestDept @moefcc @CentralIfs pic.twitter.com/YJYxRh3c2C