Mumbai Rains Live updates: The city experienced incessant rainfall with waterlogging in several parts of the city. BMC has warned about heavy rains in the next few days. Stay tuned for more updates 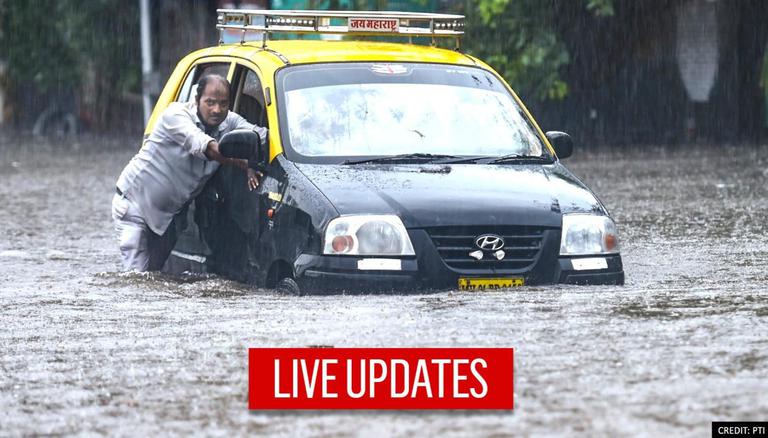 Mumbai Rains Live updates: The city experienced incessant rainfall with waterlogging in several parts of the city. BMC has warned about heavy rains in the next few days. Stay tuned for more updates

The Brihanmumbai Municipal Corporation on Sunday has asked citizens to boil water before drinking as heavy rains stopped the Bhandup water purification complex, which is one of the major sites of water supply to the city. The torrential rain that intensified from Saturday night flooded the water purification complex on Sunday, following which the civic body shut the plants down.

Considering IMD’s heavy rainfall forecast for the next 4-5 days in Mumbai, CM Uddhav Balasaheb Thackeray has directed @mybmc & all agencies to be prepared for any eventualities, work around the clock in close co-ordination to tackle them. All rescue teams must be on stand-by.

The BMC on Sunday evening updated the official number of people who were killed in various incidents following heavy rainfall in the city. According to the updated figures, 10 people died in Vikroli, 21 lost their lives in the Chembur landslide while 2 suffered

Twenty-five people died in house collapse incidents after heavy showers, which caused severe waterlogging and disruption of suburban train services and vehicular traffic in the metropolis on Sunday, officials said.

Seventeen people died as a compound wall came crashing down on some houses located on a hillock after a landslide, a fire official said.

Seven hutment dwellers died as six shanties collapsed after a landslide following incessant overnight rains in Mumbai's Vikhroli suburb at 2.30 am, a civic official said. Two persons were injured and were sent to a nearby hospital, he added.

As a result of the inclement weather, Chhatrapati Shivaji Maharaj International Airport (CSMIA) has temporarily suspended flight operations between 00:42-05:24 hrs on July 18 as a safety precaution. During this time, a total of 9 flights were diverted. Flight operations at CSMIA recommenced with effect from 05:24 hrs and are proceeding as per schedule.

In the Vikrohli building collapse incident, the death toll has increased to seven, and one is injured, who has been discharged from the hospital, the BMC said.

The news of the loss of innocent lives in two separate incidents in Chambur and Vikroli areas of Mumbai following heavy rains is saddening. Convey my condolences to the kin of the victims and pray for the safe rescue of all others.

On Sunday afternoon, the Central Railways updated the operational and non-operational local train services in Mumbai.

Amid several leaders expressing grief over the death of people due to accidents followed by heavy rainfall in Mumbai, Uttar Pradesh Chief Minister Yogi Adityanath expressed deep condolences as well. Taking to Twitter, the CM said 'my heart is deeply pained and saddened by the heart-wrenching incident of the accident in Chembur, Mumbai'. Both PM Modi and CM Thackeray have announced ex-gratia for the victim's kin.

According to the Greater Mumbai Municipal Corporation, parts of the city faced disruption in the water supply as heavy rainfall caused shut down of the Bhandup water purification complex.

Filtration & drainage plants at Bhandup water purification complex have been shut down due to inundation of the complex following heavy rain, disrupting water supply in most parts of Mumbai. Efforts are underway to restore water supply: Greater Mumbai Municipal Corporation

Heavy rainfall in Mumbai that left several stranded, loss of life, and major injuries, Maharashtra Chief Minister Uddhav Thackeray announced a relief of Rs 5 lakh for the families of those who lost life and free treatment to the injured.

Maharashtra CM Uddhav Thackeray has expressed grief over the deaths in accidents at Chembur & Vikhroli due to torrential rains & announced that the government would pay Rs 5 lakh each to the heirs of the deceased & free treatment would be given to the injured: CMO

After a wall collapsed in the Chembur area of Mumbai leaving over 14 dead, State Environment Minister Aditya Thackeray reached the disputed area to take a stock of the situation.

Maharashtra Environment Minister Aditya Thackeray reaches the site where a wall collapse has claimed the lives of 17 people in Mumbai's Chembur pic.twitter.com/0T4qkVbTb7

Following heavy rainfall in Mumbai, several parts of the city witnessed horrific situations including a wall collapsed incident in the Bhandup area where a 16-year-old with at least 14 others lost their lives. In another incident, a man died due to electrocution in the Andheri area. Municipal Corporation of Greater Mumbai updated regarding the unfortunate development.

As heavy rain lashed Mumbai in the wee hours of Sunday, train services were severely hit. Initially, all the services were halted however as the situation improved few of the operations were resumed. Here is the updated list as posted by the Central Railwas.

After heavy rainfall lashed parts of Mumbai on early Sunday, here are visuals from the Nalasopara area of the city. Moreover, IMD has issued a heavy rainfall alert for today as well.

As several people in parts of Mumbai faced causality due to heavy rainfall in the city, Home Minister Amit Shah offered heartfelt condolences for the loss. Earlier PM Modi and Union Minister Nitin Gadkari also expressed grief on the development. At least 14 people died in Chembur, 3 in Vikhroli, 12 in Vashi Naka.

Earlier 11 people were reported to be killed after a wall collapsed in the Chembur area of Mumbai. Now the death toll has risen to 14 and rescue operation is underway by the NDRF team. The wall collapse resulted from the heavy rainfall that lashed the city on Sunday.

After 11 people in Chembur died due to wall collapse in Mumbai's Chembur area, Union Minister Nitin Gadkari expressed shock towards the unfortunate incident. The wall collapse incident was followed by heavy rainfall that lashed the city on Sunday. PM Modi has announced Rs 2 lakh relief package for the victim's kin.

Due to heavy rainfall in Mumbai, at least 11 people lost their lives after wall collapsed in Mumbai's Chembur area. Prime Minister Narendra Modi has announced Rs 2 lakh each for the kin of the victims. Prime Ministers' Office (PMO) also informed that Rs. 50,000 will be given to those who are injured.

After facing issues due to a heavy downpour on Sunday, the local train services of Suburban's Western Railways were resumed.

Suburban's Western Railways services are restored. passengers are requested to come out only if necessary.

Vihar Lake, which supplies drinking water to residents of Mumbai, starts overflowing following heavy rainfall in the city. The heavy downpour started in the wee hours of Sunday and continued all night.

Due to heavy rainfall on the intervening night of July 17-18, several train services were halted due to waterlogging and other issues. The Western Railways have however restored services inc certain train services around Virar, Churchgate, and Borivali area.

Restoration of Suburban services
Virar
FIRST UP /slow at 7:32 Hrs
FIRST UP fast at 8:51 Hrs

As per the weather update shared by the Central Railways, parts of Mumbai and nearby areas including Kanjurmarg, Thane received rainfall over 200 mm.

Due to heavy rainfall, the Central Railways in Mumbai 'terminated, canceled, rescheduled' in Mumbai.

Seven people died and two were injured after a house wall collapse at Vashi Naka in Mumbai's Mahul area, a fire official said.

A retaining wall collapsed at 1 am after a tree fell on it, he said. The injured were taken to nearby Rajawadi hospital, he added.

The India Meteorological Department (IMD) has issued a red alert for Mumbai in the backdrop of heavy rains, a BMC official said.

A sudden change in climatic conditions led to Mumbai witnessing over 100 mm rainfall in six hours, the IMD said in an early morning bulletin. It also changed the rains forecast for the city from orange to red alert.

The IMD said that till 6.30 am on Sunday, Mumbai and adjoining areas received over 120 mm rainfall in preceding 12 hours.

Even as the local train services resumed in parts of Mumbai, the Central Main Line and Harbour Line kept the train services shunted due to incessant rainfall.

Expressing mourn over the news of people who lost their lives due to heavy rainfall in Mumbai, Lok Sabha speaker Om Birla prayed for the speedy recovery of those who are injured. A landslide in the Chembur area of Mumbai left 11 people dead and a residential building collapsed in Vikhroli. NDRF is carrying out rescue operations.

Maharashtra: A ground-plus-one residential building collapsed in Mumbai's Vikhroli area in the wee hours of Sunday, killing three people, as per BMC