India's neighbouring country Myanmar has given out a statement strongly condemning the Pulwama terror attack and asserted its support with the international community to fight terror.

India's neighbouring country Myanmar has given out a statement strongly condemning the Pulwama terror attack and asserted its support with the international community to fight terror.

It also expressed its condolences to families of victims.

"Myanmar strongly condemns the heinous terrorist attack in Pulwama, Jammu and Kashmir on 14 February that claimed many lives and caused a number of injuries," the statement read.

It also said that the country "stands together with the international community in the fight against the grave global danger of terrorism." 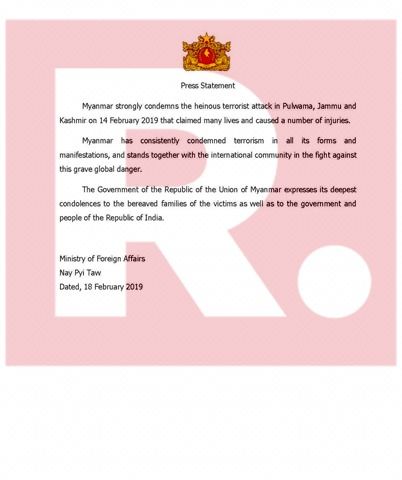 Bangladesh has also reiterated its support to combat terrorism with the international community after the Pulwama terror attack.

Bangladesh Prime Minister Sheikh Hasina offered her condolences to the families of the martyrs in the CRPF terror attack in Pulwama on Thursday and said it maintains a zero-tolerance policy against terror activities.

"At this sad moment, we stand by the people and government of India. We offer was condolences to the members of the families who lost their dear ones. Our thoughts and prayers are speedy recovery of those who got injured. Bangladesh remains steadfast in its commitment against terrorism of all forms and maintains a zero-tolerance policy against any kind of terrorist activities. We would continue to work and cooperate with international community including India to eradicate menace of terrorism," she said.

The Pulwama terror attack has been condemned globally with countries like the United States, Russia supporting retaliatory action against Pakistan by India.

Heavily criticizing Pakistan, Iran has even warned the country over for terror attack in its own soil.

Iranian Islamic Revolutionary Guard Corps Commander, Mohammad Ali Jafari has called Islamabad for a crackdown or notified them of "retaliation".

"The government of Pakistan must pay the price of harbouring these terrorist groups and this price will undoubtedly be very high," Jafari told Iranian media.

He added, "If Pakistan fails to punish them in the near future, Iran will do so based on international law and will retaliate against the terrorist."

READ | After India, Iran warns Pakistan of 'retaliation' after a suicide attack on Iranian security forces