NASA has revisited one of Hubble’s images with the highest resolution where stars can be seen glittering in a massive galaxy named NGC 300. 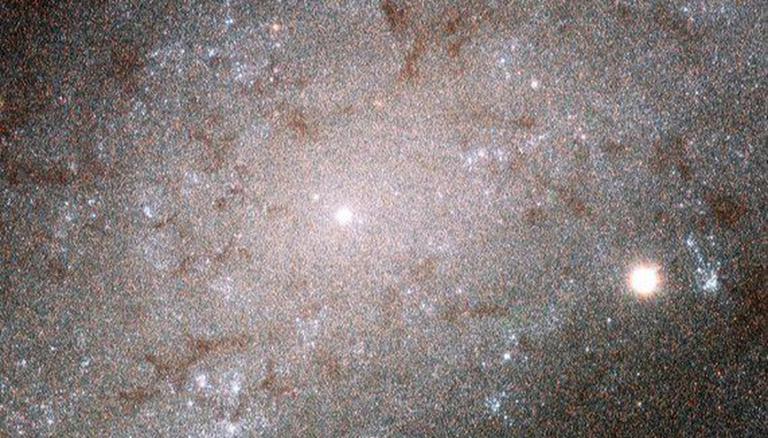 
NASA’s Hubble Space Telescope has been a constant source of fascination in its three decades of service as the images captured by it have revealed uncountable awe-inspiring features of the universe. Reminding us about one of such feats by the telescope, NASA has revisited one of Hubble’s images with the highest resolution where stars can be seen glittering in a massive galaxy. Check out the image below.

✨ Stars or grains of sand?

This #HubbleClassic view of the galaxy NGC 300 shows off the telescope’s spectacular resolution, which allows us to see stars as individual points of light… even though the galaxy is millions of light-years away.

As you can see, this myriad of stars in the galaxy NGC 300 appears as if they are grains of sand and can be singled out owing to the high resolution of the picture. According to NASA, this galaxy featuring millions of stars is located 6.5 million light-years from Earth and is a spiral galaxy similar to our own Milky Way galaxy.

More about the image

A report by NASA revealed that the image was captured by Hubble's Advanced Camera for Surveys(ACS), which offers 10 times better resolution than the ground-based telescopes. Thanks to Hubble, millions of stars are visible in exquisite detail as opposed to the ground-based telescopes that pick light from only the brightest stars in the galaxy. Detailing about the galaxy, the agency informed that it is a member of the Sculptor group, which is a group of galaxies nearby the Milky Way and is named after the southern constellation, which is the group's location.

The blue colours that you see in the image represent the young stars. According to NASA, these stars are called blue supergiants and are massive and among the brightest stars seen in spiral galaxies like NGC 300. However, it is in the center of the galaxy where its nucleus resides and is the area where even Hubble's ACS fails to detail the stars owing to the immense light being emitted. Although the image is new, Hubble has been collecting data of NGC 300 since 2002. Explaining the significance of the database, NASA said, "These Hubble data are being used to test a new method for measuring distances to galaxies and to compare it with the more traditional methods, such as the period-luminosity relationship of pulsating stars known as Cepheid variables. Measuring distances is a perpetual but important concern for astronomers".

WE RECOMMEND
NASA fully recovers Hubble telescope's instruments after month-long shutdown
NASA set to launch new IXPE X-ray telescope on Dec 9; here's where and when to watch
NASA scientist explains how oceans of alien worlds can answer if we're 'alone'
Who is Anil Menon? Know all about NASA's latest recruit who is set to become an astronaut
NASA shares images of 2021's last total solar eclipse clicked by astronauts aboard the ISS