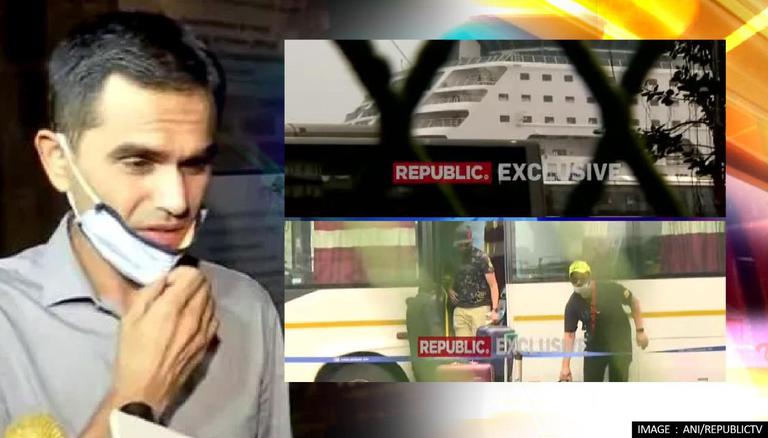 Operation 1- Based on the preliminary interrogation of the accused Mohak Jaswal, a team of NCB Mumbai conducted a raid at Jogeshwari and intercepted one person with 2.5 grams+ of ecstasy & 54.3 gram (commercial quantity) of Mephedrone in his possession.

Operation 2- Based on the preliminary interrogation of the accused Ishmeet Singh Chadha, a follow-up operation was launched at Goregaon, Mumbai by the team of NCB Mumbai and intercepted one namely Shreyas Surendra Nair along with a small quantity of Charas.

Operation 3-NCB Mumbai intercepted Manish Rajgaria who was invited as a guest in the ship and recovered a small quantity of Hydroponic Weed. NCB Mumbai also arrested one Avin Sahu who sailed in the Ship/Cruise Cordelia on consumption charges.

The  Narcotics Control Bureau (NCB) on Saturday busted a high-profile drug party on a cruise ship en route from Mumbai to Goa. The party allegedly involving celebrities, including actor Shah Rukh Khan's son Aryan Khan, was busted by the NCB after an eight-hour-long operation. Cocaine, Hashish, MD, and other drugs were recovered, and eight including Aryan Khan were detained.

After a 15-hour-long interrogation, the detainees were put under official arrest. Of the eight, three- Aryan Khan, Arbaaz Merchant, and Munmun Dhamecha were produced before the Killa court on October 3 and were remanded police custody till October 7. The other five-Nupur Satija, Ishmeet Singh Chadha, Mohak Jaiswal, Gomit Chopra, and Vikrant Chhokar - were produced before the Court on October 4, and also sent to police custody till October 7.

On the basis of information gained during their interrogation, the police arrested 4 others- Shreyas Nair, Abdul Sheikh, Manish Darya, and Avin Sahu-- and they have been sent to police custody till October 11.

Meanwhile, 4 others -Gopal Jee Anand, Samir Sehgal, Manav Singhal, and Bhaskar Arora- who are said to be organizers have also been arrested from Delhi. They are yet to be produced before the court. With this, the total number of arrests in the case has climbed to 16.