“Suparna Singh has informed the company that she will step down from her responsibilities as Interim CEO with immediate effect,” NDTV said in a regulatory filing.

Coming on the back of CBI’s crackdown on top-members of the company, Singh’s exit comes within two years of her taking charge as Interim CEO of the company.

On the developments of Singh’s exit, NDTV has issued a disclosure to the BSE Limited and the NSE signed by the Company Secretary and Compliance officer. “Pursuant to a board resolution dated December 4, 2017, the board resolved to appoint Ms. Suparna Singh as its CEO subject to the receipt of requisite approval from the Ministry of Information and Broadcasting. This approval was promptly applied for on December 12, 2017, but has not yet been received,” NDTV’s disclosure said. 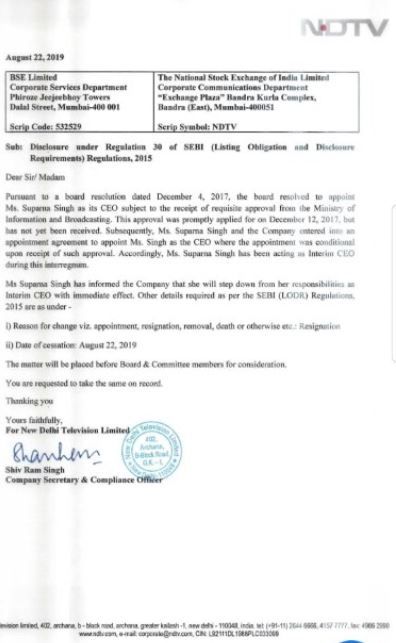 Meanwhile, on Wednesday, the CBI had booked Prannoy Roy and Radhika Roy for allegedly violating rules relating to Foreign Direct Investment in the years between 2004 and 2010. Additionally, the former CEO Vikramaditya Chandra also found mention in the CBI’s FIR for charges of criminal conspiracy, cheating and corruption.

The specific allegation against those named in the FIR is that NDTV had floated as many as 32 subsidiary firms on foreign shores. As per PTI, these included firms established in tax havens of countries like Holland, the United Kingdom, Dubai, Malaysia, Mauritius etc. Moreover, as per the CBI, these subsidiary companies of NDTV had no real business transactions but were allegedly being used to route foreign funds into India. The top investigating agency has also reportedly hinted at money laundering through “multiple layers of complex transactions and shell companies”.

As per PTI, the CBI has termed NDTV’s transactions in these subsidiary companies as “sham”.

After the Roys and Chandra were booked on Wednesday, NDTV released a statement denying the allegations and said that the agencies “found no evidence of any corruption by NDTV”.