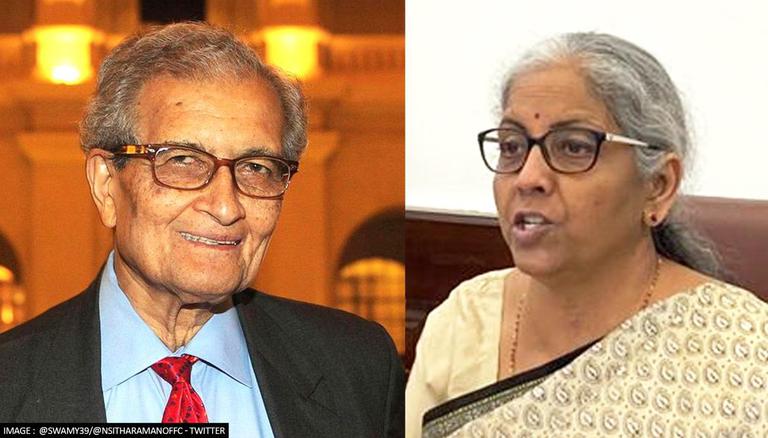 
Union Finance Minister Nirmala Sitharaman on Wednesday took swipe at Nobel Laureate and economist Amartya Sen for his views on the Bharatiya Janata Party (BJP) government in India. She said that it is worrying that views of scholars can be 'influenced' by their personal likes and dislikes rather than on basis of facts.

At an event organised by Mossavar-Rahmani Center for Business and Government, Harvard Professor Lawrence Summers asked Sitharaman that the "number of people in our community", including economist Amartya Sen has expressed "rather strong reservation" about the current union government. He added there is a sense that legacy of tolerance "has been very much called into question."

In reply, the finance minister stated that even violence in non-BJP states comes at the doorstep of the Prime Minister 'because it suits the narrative'. On Amartya Sen, Sitharaman said he goes to India and moves freely. "That itself would help us to know, particularly a scholar, who is talking based on facts."

'Worrying that scholars can be influenced'

Speaking at Harvard Kennedy School, Sitharaman said that, in India, provinces look after the law and order. If in the US, if any particular state has any problem, the president may not have to deal with it but the governor of that state, she said.

"That is similar in India," she said adding that there are provinces (States) in India which are not ruled by the party to which PM Narendra Modi belongs. Even last night, in a state not where BJP is not in government took place which left some dead, Sitharaman said.

"But even that will be at the doorstep of the Prime Minister because that suits my (their) narrative. It is not right because in that state, in that province, law and order is governed by the elected Chief Minister of that region who is not even a party man for Prime Minister Modi," she stated.

READ | Raise incidents like Lakhimpur each time, not just where BJP is in power: Sitharaman

On tolerance, she that there have been people who have criticised and used derogatory words against PM Modi. "Has anyone of them been touched, have they been questioned," she asked. "Whereas in non-BJP ruled states, when the Chief Ministers have been questioned, the first thing is to arrest them and put them in jail," the finance minister said.

Finance Minister Nirmala Sitharaman arrived in the US on Monday to attend the annual meeting of the World Bank and IMF as well as the G-20 meet. She is also expected to hold talks with US Treasury Secretary Janet Yellen.