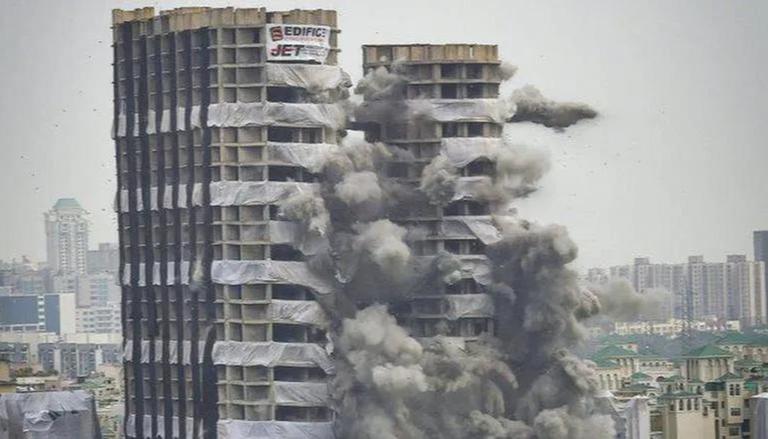 
New Delhi: As the nearly 100-metre-tall Supertech twin towers were razed to the ground on Sunday, doctors said people living nearby, especially those suffering from respiratory diseases, should take extra care and avoid the area for a few days if possible.

The demolition of the structures generated an estimated 80,000 tonnes of debris and sent huge clouds of dust billowing in the air.

The doctors said most dust particles have a diameter of 5 microns or less and can remain suspended in the air for a few days in the absence of favourable meteorological conditions like strong winds and rain.

Dr Jugal Kishore, head of Community Medicine Department at Safdarjung Hospital, said, "The dust particles will remain suspended in the air for quite some time in case of low wind speed. People suffering from respiratory problems -- chronic obstructive pulmonary disease, asthma and bronchitis -- should avoid the area, if possible."

"They should limit exposure to the affected area for at least 48 hours. Others living in and around the area should avoid exercise for a few days," he said.

"Viruses may also piggyback on the fine particles and increase infection rate as it's the flu season."

"People should take precautions and keep a buffer stock of medicines. Use N-95 masks and eyeglasses till pollutants dissipate. Wear full-sleeved clothes and avoid morning walks for a few days. Consult doctors if problems worsen," he said.

Dr Dipankar Saha, former chief of the Central Pollution Control Board's air lab, said Noida authorities should keep an eye on the air pollution level till the debris is cleared with the help of low-cost sensors.

"Modelling should be done to ascertain the zone of influence. The people living in and around the area should monitor air quality and step out only in unavoidable circumstances. Avoid exposure for a few days. Water sprinkling on regular intervals will help immensely," he said.

The air pollution problem will persist till the debris is cleared and it is certainly going to affect the health of people. A study may be done to ascertain the health impact of this demolition, Dr Saha said.

Dr Harshal Salve, additional professor, AIIMS, said the air quality in the area is likely to plunge to alarming levels and continue to remain so for the next 15 days.

"Measures such as the use of smog guns will be ineffective in mitigating dust pollution and high levels of particulate matter generated due to the demolition. We must look beyond such measures in order to mitigate air pollution that is likely to cause breathing problems and health ailments for residents living in the vicinity of this area in Noida," said Dr Salve.

The towers -- taller than Delhi's iconic Qutub Minar -- are the tallest structures yet in India to be demolished.

Over 3,700 kg of explosives were used to bring down the structures in pursuance of a Supreme Court order that found their construction within the Emerald Court society premises in violation of norms.

Around 5,000 residents of Emerald Court and adjoining ATS Village societies in Sector 93A vacated their premises on Sunday morning and took away 150-200 pets, including cats and dogs, with them for the day.

The closest buildings next to the twin towers are Aster 2 and Aster 3 of the Emerald Court society which are just nine metres away.