National Security Advisor (NSA) Ajit Doval on Sunday held an inter-religious faith meet at his residence, a day after the Supreme Court's verdict in the Ayodhya land dispute case. While addressing the religious leaders, Ajit Doval conveyed the message of peace among different religious communities. He said, "I want to convey the message of peace and how we can promote love and harmony among each other."

'We should try that we don't fall into any controversy'

The NSA, while appealing to the religious leaders, said, "We should try that we don't fall into any controversy and in order to live peacefully we need to understand each other." He added, "I also don't want to speak more about unnecessary things." After that, Ajit Doval opened the floor to all religious leaders for open discussion and exchange of ideas. 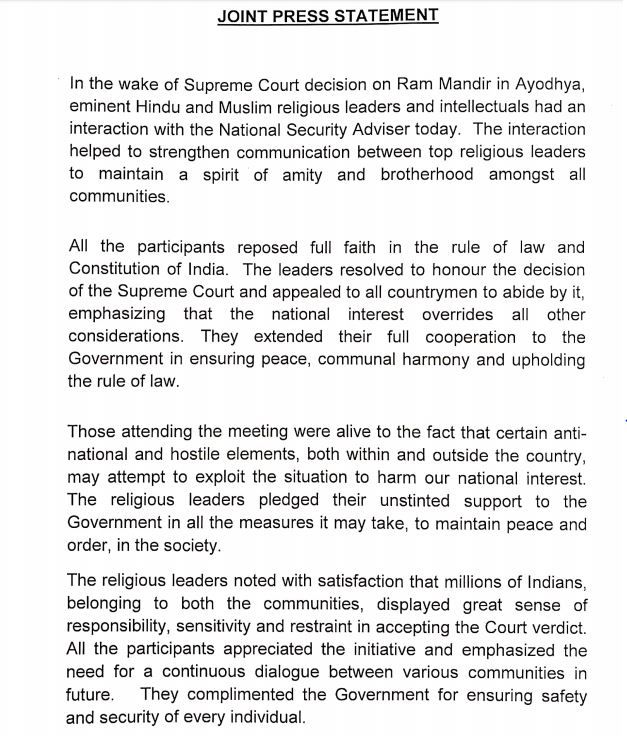 Earlier on Saturday, Ajit Doval met Avdheshanand Giri, Swami Parmatmanand and Baba Ramdev at his residence for the meeting that lasted for almost an hour. Chairman of the Hindu Dharma Acharya Sabha Avdheshanand Giri and Swami Parmatmanand, after meeting NSA Ajit Doval, said that they had discussed the situation post the verdict. "The verdict should not be seen as victory or defeat of one or the other, it is a verdict in favour of the nation. Everybody should respect it," they said. "We met the NSA to discuss the need for maintaining peace in the country. We will continue to work for it," Parmatmanand said.

Commenting on the Supreme Court’s judgment in the Ayodhya land dispute case on Saturday, Prime Minister Narendra Modi had stressed that it was imperative for everyone to strengthen the spirit of ‘Rashtra Bhakti’. Observing that the verdict should not be equated in terms of victory and loss, he stressed on maintaining peace and harmony.

Pronouncing the landmark verdict in the Ayodhya dispute case, the Supreme Court on Saturday delivered a unanimous judgment in the title suit of the disputed area awarding it to the Hindu parties for the construction of a temple. It also directed the Centre to come up with a scheme within three months to set up a trust which will hand over the outer courtyard and inner courtyard of the site for construction of a temple. Apart from this, the SC stated that an alternate land of 5 acres is to be allotted to Muslims for the liberty of constructing a mosque, either by the central govt or the State govt, in a suitable and prominent place in Ayodhya. CJI Ranjan Gogoi, while delivering the unanimous judgment, dismissed the claims of the Sunni Central Waqf Board and the Nirmohi Akhara. He also termed that the three-way division of the disputed land by the Allahabad HC in its 2010 verdict is wrong.