On Tuesday, the floor leaders of the Opposition parties in both Houses of Parliament will meet to discuss a proposal for a march by all opposition MPs. 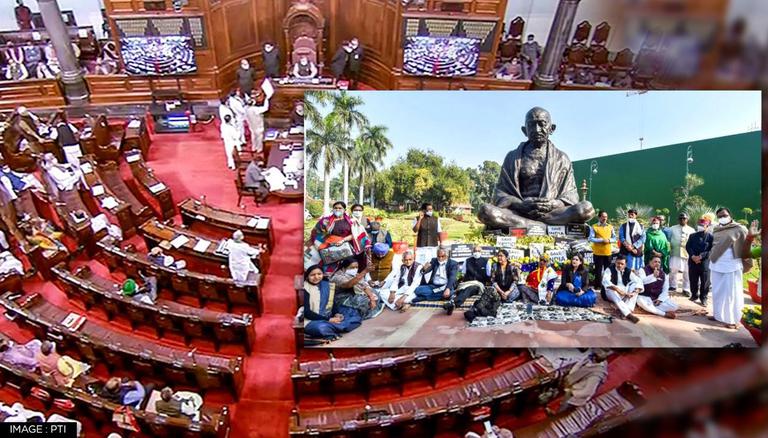 
On Tuesday, the floor leaders of the Opposition parties in both Houses of Parliament will meet to discuss a proposal for a march by all opposition MPs from the Gandhi statue to Vijay Chowk in Delhi, in support of 12 Rajya Sabha members who have been suspended. The meeting will take place on Monday at 10 a.m. in the chamber of Rajya Sabha Leader of Opposition (LoP) Mallikarjun Kharge.

Congress Rajya Sabha Leader Mallikarjun Kharge on Monday said that the suspension of 12 opposition MPs is a violation of House rules and the Constitution.

"We (12 MPs) are sitting on a dharna in front of Gandhi's statue in protest of the Chairman's decision to suspend us. This is a violation of both House rules and the Constitution. They should lift the suspension, bring us back, and allow us to express ourselves in the House," Kharge told news agency ANI.

The opposition's demand for the suspension of 12 MPs to be lifted resulted in disturbances and the Rajya Sabha being adjourned on Monday. The uproar began when Rajya Sabha Leader Piyush Goyal criticized the 12 MPs for failing to express regret for their behaviour, leading to their suspension shortly after the House reassembled at noon following the first adjournment over the issue.

Since the opening day of the Winter Session of the Parliament, the Upper House has been continuously adjourned due to the suspension of the 12 members. Six members of the Congress, two each from the Trinamool Congress and the Shiv Sena, and one each from the CPI and the CPM are suspended.

The representatives were suspended for purported disorderly behaviour near the close of the monsoon session in August, when marshals were called after Opposition members stormed the Well of the House during a debate on the General Insurance Business (Nationalisation) Amendment Bill, 2021.

Since the first day of their suspension, the MPs have been protesting in front of the Gandhi statue on Parliament grounds. Parliament's winter session began on November 29 and will end on December 23.