Owaisi took strong objection to the Mathura District Court's ruling that the suit to remove masjid in the Krishna Jhamabhoomi-Shahi Idgah case was maintainable. 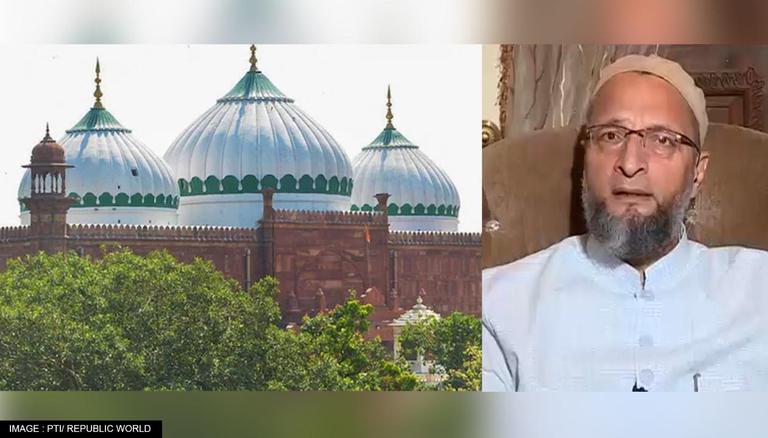 
All India Majlis-e-Ittehadul Muslimeen (AIMIM) chief Asaduddin Owaisi on Thursday took strong objection to the Mathura District Court's ruling that the suit to remove masjid in the Krishna Jhamabhoomi-Shahi Idgah case was maintainable. Taking to Twitter, the Member of Parliament once again cited the Places of Worship Act 1991 and claimed that such cases were 'prohibited from even going before the courts'. The representative of the Hyderabad constituency alleged that "law doesn’t matter anymore".

"Robbing Muslims of their dignity is the only goal now," he wrote in the Twitter post, with which he had embedded an agreement that he claimed was entered into by the Sri Krishna Janmasthan Seva Sangh & Shahi Idgah Trust in 1968 for the resolution of the issue.

Through the 'agreement' between the two sides, it was decided that the northern and the southern walls of Idgah's Kuchchi Kurshi shall be extended towards the eastern side. Outside the northern and southern walls, the area evacuated by Muslims will be evacuated and handed over to the Hindu side. The area inside the walls would be retained by the Muslim side. Also, the portion of land occupied by the Hindu side in the west-northern corner, would be handed over to the Muslim side. It was mentioned that there would be no claim by either side on the land of the other side post the agreement.

Earlier in the day, the Mathura District Court held that the suit to remove the Shahi Idgah Masjid, allegedly built on the land of Shrikrishna Janam Bhoomi is maintainable. The court kept aside the order of the civil court to not admit the Hindu side's suit on grounds of the Places of Worship Act, 1991, and said it was 'incorrect'.

The court's ruling came while hearing a plea against the civil court's order, preferred by 'Bhagwan Srikrishna Virjman', through his next friend Ranjana Agnihotri. They had asserted that as devotees of Lord Krishna, they had the right to move the suit in view of their fundamental rights under Article 25 (Freedom of Religion) of the Constitution, which guarantees Darshan and performance of puja at the actual birth of place of the diety which is at present beneath the structure 'illegally raised by Muslims'.

"Right to sue of the plaintiff will stand restored. The case will be restored at its original number," District Judge Rajeev Bharti ordered.