Pakistan Talks About Peace While Its PM Glorifies Osama As A Martyr: India At UNGA

India also busted Pakistan's claims on Jammu and Kashmir at the UNGA session and demanded that the country vacate areas under its illegal occupation. 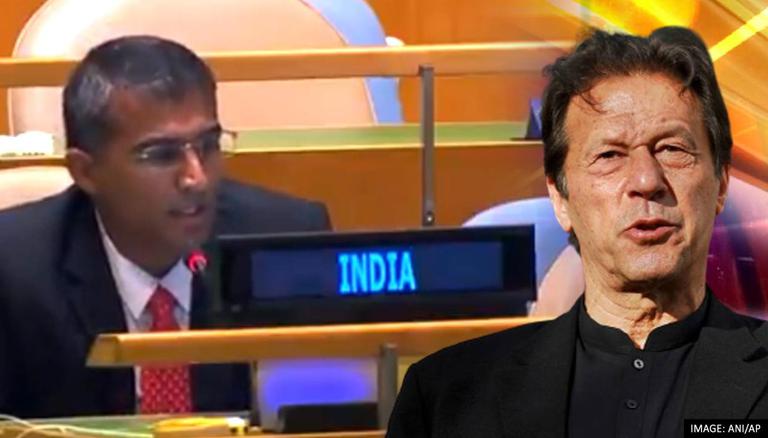 
India launched an unsparing attack against Pakistan for 'glorying terrorists as martyrs' at the First Committee General Debate of the 76th UN General Assembly session on Monday. Exercising its Right of Reply, Counsellor in India's Permanent Mission to the UN, A Amarnath hit out at the nation's representatives for talking about peace at global forums, while indulging in cross-border terrorism against its neighbours back at home.

In Right of Reply, A Amarnath said: "As the epicentre of global terrorism, Pakistan has repeatedly indulged in cross-border terrorism against its neighbours, with no regard for UN principles." He added, "Pakistan permanent representative talks about peace, security here, while their PM Imran Khan glorifies global terrorists like Osama Bin Laden as martyrs."

India also busted Pakistan's claims on Jammu and Kashmir at the UNGA session and demanded that the country vacate areas under its illegal occupation. Moreover, A Amarnath called out Islamabad's 'desperate attempts' to peddle falsehoods at multilateral forums, and said that such acts deserve collective contempt. "Pakistan has made a number of unsubstantiated allegations against India including in relation to Jammu and Kashmir and Ladakh. These do not merit a response as they pertain to matters internal to India," he said.

"Let me reiterate here that the entire territory of Jammu and Kashmir, was, is and always will be an integral and inalienable part of India. This includes the area that is under illegal occupation of Pakistan," he added. "We call upon Pakistan to immediately vacate all these areas under its illegal occupation," Amarnath said.

The scathing remarks by the Indian representative came at UNGA's First Committee General Debate. The forum deals with disarmament, global challenges and threats to peace that affect the international community. It attempts to arrive at solutions to the challenges in the international security regime.

WE RECOMMEND
Pakistan: Video of Donkey climbing aboard a car catches netizens' eye; Watch
Pakistan opposition demand Imran Khan's resignation after Pandora Papers mention his aides
Pakistan, Afghanistan Madrasas the breeding ground for terrorists: EFSAS researcher at UN
This video of Sachin Tendulkar smashing Imran Khan & Pakistan in a World Cup is timeless
Pakistan's Umar Akmal mocked by fans as he flies off to US for 'personal meetings'