A 'vlogger' who tried his hands at paragliding and ended up literally begging the instructor to get him back to the ground, as they hover in the clouds.

When it comes to finding hilarious content, social media turns out to a treasure trove that provides endless ammunition to meme-makers and humourous content that will leave the viewer in peals of laughter. This time it involves a 'vlogger' who tried his hands at paragliding and ended up literally begging the instructor to get him back to the ground, as they hover in the clouds. Vipin Sahu has become a laughing stock on social media with his mid-air commentary throughout his paragliding session. Sahu took to YouTube to post the six-minute-long video following which it did viral rounds on social media, becoming a meme material already. Moreover, he also offers a bribe to the instructor to make him land.

Vipin Sahu can be seen taking off from the ground with the same fear and excitement that normal people feel before an adventure. However, as soon as Sahu is off the ground, it looks like fear overtakes and clouds Sahu's senses, as he is seen pleading with the instructor to get him back to the ground. Sahu is also seen closing his eyes throughout his flight with his palm on his chest. After the first few minutes, Sahu can be seen begging to the instructor as he can be heard saying 'Land kar do bhai' repeatedly. The instructor is also seen and heard in the background reassuring Sahu of his safety while also asking Sahu to pick his legs up in order to ensure a safe flight and in order to maintain balance. Moreover, he also offers a bribe to the instructor to make him land. Take a look at the video posted by Sahu on YouTube:

Ever since the video made its appearance on social media, it has been widely circulated and has left most of the viewers in peals of laughter. Sahu became an instant hit among the meme-makers and found his name and the video being circulated across many social media platforms. While few netizens offered their sympathies to Sahu, the rest couldn't help but burst out with laughter. Sahu had also used expletives in the middle of his flight - another valuable addition to the meme-makers as they incorporated Sahu's scenario into other contexts in the form of memes. Netizens also poked fun at the fact that Sahu offered a bribe to the instructor to make him land as soon as possible. Here are some of the reactions:

*boards flight for the first time* 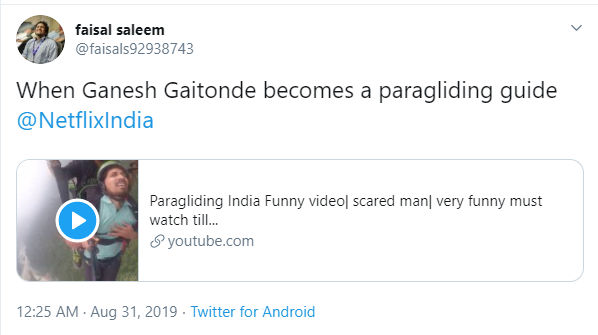