The Kerala driver printed Paulo Coelho's name behind his auto and wrote the name of his highly-praised novel, "The Alchemist" in Malayalam. 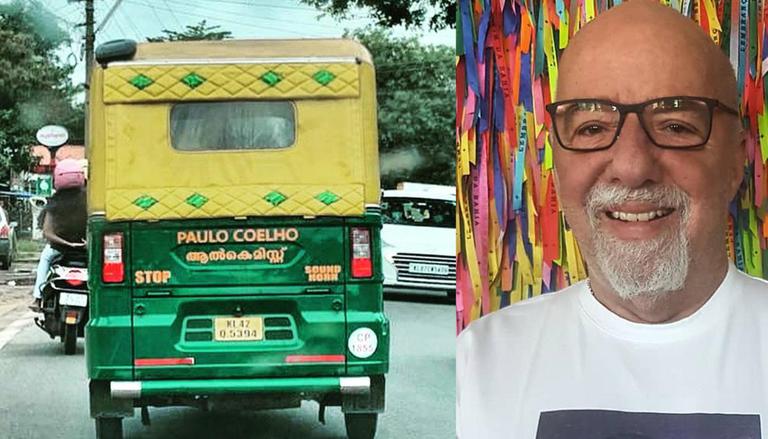 
From Bollywood to Hollywood, Indian autorickshaws have it all covered when it comes to putting up the most eye-catching lines on their vehicle. Adding to the trend is this autorickshaw driver from Kerala, who caught the attention of the Brazilian novelist Paulo Coelho. The Kerala driver printed Coelho's name behind his auto and wrote the name of his highly-praised novel, "The Alchemist" in Malayalam.

Paulo, on receiving the picture from his team, posted it on Twitter. He captioned the picture with a simple statement and thanked his sources. As a result of massive social media following, Paulo's post was quickly noticed by the Indian community who broke the news to the 55-year-old auto-driver, Pradeep. Since uploaded, the image garnered over 21.4k likes, 305 comments, and over 1500 retweets. Take a look at the post:

Kerala, India (thank you very much for the photo) pic.twitter.com/13IdqKwsMo

Coelho is a household name in Kerala; say netizens

Paulo coelho is a household name in Kerala and Alchemist would be familiar to a majority. Glad that this pic reached all the way till Brazil. Again Brazil 🇧🇷 is a second home to millions of diehard Brazil soccer fans here. We invite you to the 'God's own country' legend ❤💕

The comment section of Paulo Coelho's post was abuzz with natives from Kerala expressing their love for the writer. While some fans flaunted their collection of Paulo's books, many invited the novelist to "the God's Own Country." "Paulo Coelho is a household name in Kerala and Alchemist would be familiar to a majority. Glad that this pic reached all the way to Brazil...We invite you to the 'God's own country' legend ❤," one wrote. Some also boasted about Kerala's literacy rate in the comment section. "Kerala is the most literate state in India, with a 96.2% literacy rate, according to a report based on a National Statistical Office survey," one user wrote. Overall, the viewers poured their love and affection for the Brazilian lyricist.

The Alchemist is my favourite novel, says Pradeep

A resident of Cherai in Kerala's Kochi city, Pradeep loves to read. Among his favourite novels are Paulo Coelho's The Alchemist. Besides, he also adores writings by Gabriel Garcia Marquez, Tolstoy, Victor Hugo and many more. During an interview with a prominent Indian media, Cherai stated that he has always dreamt of travelling to Brazil to meet his favourite writer Coelho.

Who is THE most famous ( and one of the best) movie star in the world? pic.twitter.com/v1VRuBHfPC

Meanwhile, it is noteworthy that Coelho is quite fond of India. Earlier in 2017, he shared a picture of Bollywood actor Shahrukh Khan. He posted a picture of the Kal Ho Na Ho actor with a caption that stole the hearts of the writer's Indian fans. "Who is THE most famous (and one of the best) movie stars in the world?" Paulo wrote along with the picture of Shahrukh Khan taken outside his home "Mannat" while he was waving at his fans.