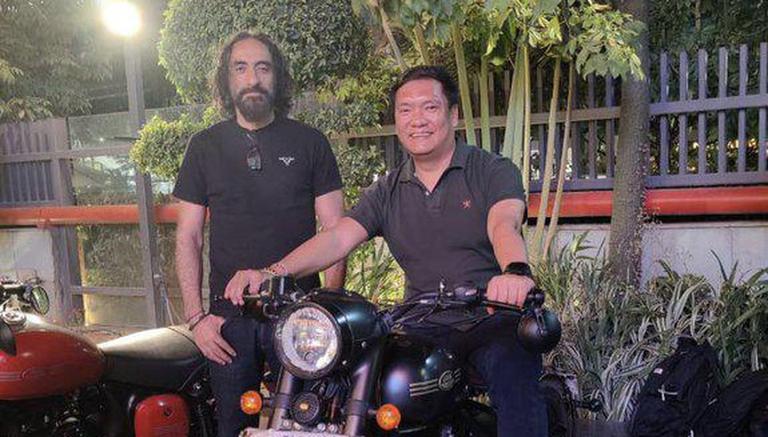 
There is something interesting lined-up as Arunachal Pradesh Chief Minister Pema Khandu bonded with Classic Legends co-founder Anupam Thareja, one of the key names in the revival of the iconic Jawa motorcyles. The duo had an enjoyable time together, sharing a common passion – bikes – and there was an exchange of stories around their love for the two-wheelers and much more.

The duo has discussed a collaboration through sustainable models of community-led development. The partnership surely promises a 'wonderful ride.'

CM Pema Khandu was all smiles as he struck a pose on a Jawa bike, with its co-founder Anupam Thareja in tow. The leader posted the photo on Twitter and promised his followers that his interactions with Thareja on sustainable models of community-led development will lead to some 'interesting initiatives' in Arunachal Pradesh soon.

Met @reach_anupam co-founder, Classic Legends today and our interactions on sustainable models of community led development will lead to some interesting initiatives in the days to come in Arunachal. pic.twitter.com/sRWSspy8DU

"Always inspirational to catch up over interesting ideas and look forward to bringing these to fruition with the Arunachal government in the coming days!" Thareja replied to the Chief Minister's tweet.

Thareja posted some more photos and termed the Bharatiya Janata Party politician as one of the 'doyens' of the state and a 'visionary adventurer'. They were accompanied by Indian Revenue Service bureaucrat Sonam Chombay and travel entrepreneur Oken Tayeng, whom he called as 'fellow revolutionaries' and 'inspirational gentlemen.'

The entrepreneur expressed his excitement for an 'impactful ride' with the trio.

Met and exchanged biking stories with the doyens of Arunachal Pradesh. The visionary adventurer @PemaKhanduBJP and his fellow revolutionaries @SonamChombay & @oken_tayeng. It's going to be one impactful ride with these inspirational gentlemen. Watch this space! #AmazingArunachal pic.twitter.com/pNQU01hrZb

Anupam Thareja is credited with the revival of the iconic Czech motorcycle brand Jawa, founded in 1929. The brand was brought to life again through the Mahindra-led Classic Legends in 2018 through a licensing deal. He played a major role in this endeavour, alongside real estate developer Boman Irani.

Before this, Thareja had kicked-started his career as a research analyst, and worked for international banks like ABN, HSBC and CSFB for a major part of his career. He then joined the corporate industry, and played a crucial role for the brand Royal Enfield as the Director from 2005 to 2008. Since quitting the bike company, he launched his own company, Phi Capital, an investment firm.

Which celebs have owned Jawa bikes?

Recently, spiritual guru Sadhguru had tweeted about the Yezdi bike of the Jawa company as having its 'own charm.' Actor Gul Panag owned a Jawa 42 and had expressed her delight about buying it in September 2021.